I think prosecutors cut this woman some slack because she’s a cutie! 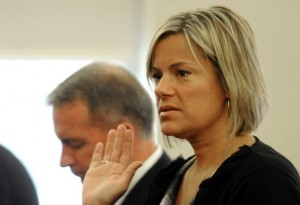 Brenda McClaine[4], 39, of Altamont, a Farnsworth Middle School[5] math teacher, also must serve five years probation as part of her plea deal. She faced a maximum sentence of 2⅓ to 7 years in prison.

McClaine, who appeared in Albany County Court before Judge Stephen Herrick[6], is to be sentenced Oct. 28.

Prosecutors said she stole $100,382.50 from the 450-member teachers association between August 2012 and October 2013. McClaine repaid the money before the criminal investigation was completed, authorities said.

As treasurer of the teachers association, McClaine forged the association president’s signature and deposited checks along with membership dues into her personal account, prosecutors said.

In March, Guilderland police charged her with second-degree larceny, a felony. She has remained free on $15,000 bail, police said.

School district officials placed McClaine on paid administrative leave, as required by law, after her arrest.

The teachers union is affiliated with New York State United Teachers[7], which has since worked with the association to put in stronger safeguards, ensuring this doesn’t happen again.

Originally posted at The Last Tradition[9]