I live on Long Island and am fairly sure no one ever got arrested for hanging an “Impeach Bush” sign anywhere, which there were a lot of. Yet, here we are[1]. 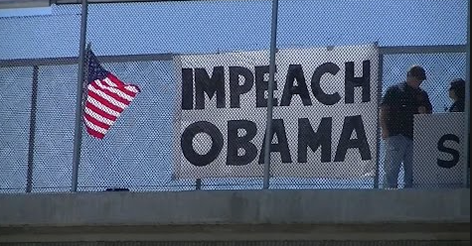 A Long Island college student who was arrested for hanging an “Impeach Obama” banner from a Long Island Expressway overpass is suing the Nassau County Police Department for violating his right to free speech, according to a Long Island federal lawsuit.

Danny Martins, a senior at Hofstra University who says he’s a member of the school’s Libertarian Club, was charged with disorderly conduct in June 2014 after hanging up the message and the American flag from a pedestrian walkway in Jericho. Nassau County prosecutors initially argued that the activity posed a safety hazard.

Martins, who routinely hung political messages from overpasses beginning in 2013, filed suit against the Nassau department as well as individual officers involved in his arrest.

The judge tossed the charges against him because it was a violation of his free speech. No word on if anyone else who hangs signs on any other overpass is being brought up on “disorderly conduct” or if their signs are “safety hazards” as well.