Student Hacked to Death by ISIS Told Her Father: “We will be killed one by one.” [VIDEO]

This precious young woman with a future full of possibilities is dead; hacked to death in grisly fashion [1]by radical Muslims, in a café, along with 19 other equally precious people. How many more families need to have their hearts ripped out and their spirits broken by these despicable Muslim killers? How many more beautiful sons, daughters, mothers and fathers must look at photos of their loved one’s remains in a pool of blood? When does the world step up and take these evil murdering Muslim terrorists out for good? Read on for details and video. 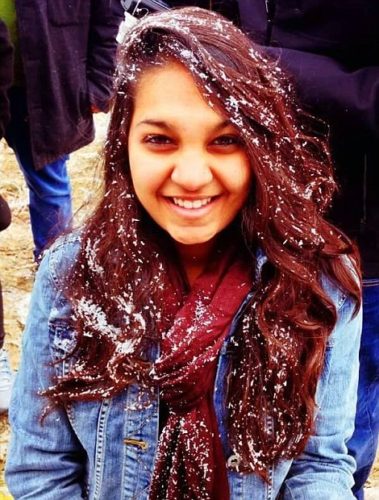 One of the American students killed in the Dhaka terror attack made a final, haunting phone call to her father moments before she was killed in the toilets where she hid with her two friends.

Tarishi Jain, 19, was one of three US students and 20 people in total to be hacked to death in the Holey Artisan Bakery in an upmarket district of the Bangladeshi capital.

With gunfire in her ears and sheer panic in her voice, she called her father to say: ‘I am very afraid… I’m not sure whether I will be able to come out alive.’

‘They are killing everyone here… I think we will be killed one by one,’ she added in the heart-breaking call, made just before 6am in the morning as round after round of gunfire rang out just outside the toilet doors.

In 2016, there should absolutely be no way that these Islamic killers, fueled by their radical theology, can continue to be able to kill anyone they want anywhere they want. There are nations with the technology, firepower and resources to take them out. And it is time it was done. Or do more sons and daughters need to be hacked to death for the western world to wake up? The leaders of the free world who stand by wringing their hands and doing nothing meaningful to stop these bloodthirsty Islamists will have the blood of innocents on heir hands. Better wake up free nations, you are next.