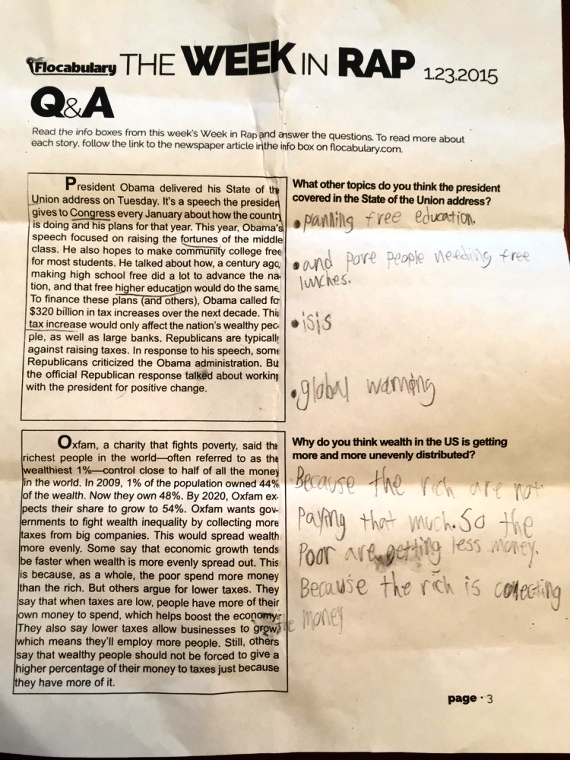 A concerned parent reportedly took the 6th grade homework from a Waterford Graded School, to Karweik, where he also displayed it on his website.

The project was an assessment of President Obama’s recent State of the Union speech, but the blatant indoctrination is shocking, even by today’s standards.

The text of the assignment read in part:

“This year, Obama’s speech focused on raising the fortunes of the middle class. He also hopes to make community college free for most students. He talked about how, a century ago, making high school free did a lot to advance the nation, and that free higher education would do the same.”

Apparently, this educator is unaware of the phenomenal failing of the “free” public school system.

The assignment then went on to push support for tax increases through the students:

“To finance these plans (and others), Obama called for $320 billion in tax increases over the next decade. This tax increase would only affect the nation’s wealthy people, as well as large banks.”

Again, the last statement is phenomenally ignorant, but facts are meaningless during the socialist brainwashing process.

The homework text then veers off a bit into some light Republican bashing, before the class warfare propaganda really kicks into high gear:

“Oxfam, a charity that fights poverty, said the richest people in world – often referred to as the 1% – control close to half of all the money in the world… Oxfam wants governments to fight wealth inequality by collecting more taxes from big companies. This would spread wealth more evenly.”

Any mention of the expanding income gap under Obama or the record and consistent Wall Street highs, under this administration were not included in the assignment.

The indoctrination seems to be working. With two accompanying questions posed to the student, the answers are telling:

Question: Why do you think wealth in the U.S. is getting more and more unevenly distributed?

Question: What other topics do you think the president covered in the State of the Union address?

There was no mention of the enormous national debt that’s been strapped to the 6th grader’s back as a possible covered topic under the SOTU speech.

On that count, the student was right.

Parents need to pay attention to what their children are learning in school. Indoctrination begins and expands as children go through school. Since they spend so much time there, parents need to combat what they are being taught.