Memories Pizza has been in the news quite a bit lately, after a controversy surrounding their refusal to cater  a same-sex marriage, and the signing of a Religious Freedom bill in their home state of Indiana.  After a crowdfunding campaign raised over 800,000 dollars for them, they decided to share their new wealth in a generous way[1]. 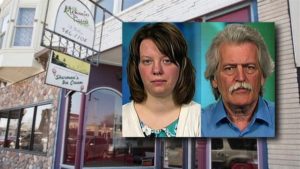 “They revealed they are set to share their new fortune with disabled children, a women’s help group, firefighters, police trusts, Christian churches, and Washington florist Barronelle Stutzman, 70, who was fined after declaring she would not serve a gay wedding.”

You may recall that the elderly florist was slapped with a $1,000 fine last month after she declined to sell flowers for the 2013 wedding of longtime gay customers. A judge ruled that Stutzman, a Christian with deeply-held religious beliefs, violated the Washington state law against discrimination.”

Many-a-satire has been created off of this issue, including Steven Crowder asking Muslim bakeries to bake a same-sex wedding cakes and other people on YouTube asking Gay bakeries to provide a pro-traditional marriage cake.  Can you guess what the reaction was?  You’re right!  One that the Mainstream media won’t report.