SUICIDE AT THE CAPITOL – Man was carrying ‘Tax the 1%’ sign

In some odd events of this past weekend, Capitol Police had to lock down a portion of the U.S. Capitol building and the steps surrounding it after a man took his own life.  Though there didn’t appear to be any additional threats, Police took precautions to ensure the safety of others there.  The man had a message[1] for people before he fired a single shot. 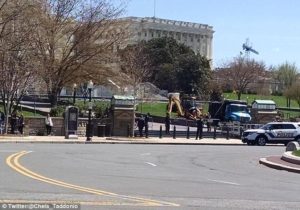 “A precautionary lockdown of the U.S. Capitol was lifted after about two hours Saturday following a suicide by a man carrying a sign demanding taxes for the ‘1%’.

The man died after shooting himself on the west front of the Capitol building just after 1 p.m., Capitol Police spokeswoman Kimberly Schneider said. No one else was hurt.

Capitol Police Chief Kim Dine said the man had a backpack and a rolling suitcase, triggering an hours-long lockdown, and a sign that said something about ‘social justice.’

Witness Robert Bishop told CNN it said something about taxing the ‘1%.’

Robert Bishop of Annapolis, Maryland said he was biking near the steps of the Capitol when the suicide happened.

Bishop didn’t witness the suicide but said there were about 60 people in the area, and that some of them did, including a girl and her mother who immediately began crying afterward.

Bishop said another witness told him and a police officer that the man who killed himself held up a protest sign about taxation just before pulling the trigger.

The man shot himself next to a fountain between the Capitol building and a street.

‘Everybody started ducking and started to run,’ Bishop said.

Washington’s Metropolitan Police Department, which is handling the investigation into the man’s death, had not released his name late on Saturday.

Bishop described the man as ‘an older gentleman.’

No one was allowed to leave or enter the Capitol or the visitors’ center during the lockdown on a busy day for tourists, and some streets around the area were closed.”

Despite the bizarre circumstances surrounding the death, it is good that no one else was hurt in the incident.  An article in the Wall Street Journal this week specifically addressed this issuing show that the top 20% of wage earners pay more than 80% of taxes.[3]