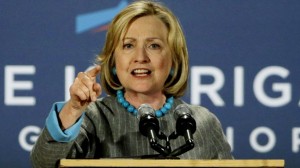 [1]A comment as ridiculous as this is made for the consumption of low information voters, Hillary’s base. These are the people who could rattle off the names of all the contestants of Dancing with the Stars over the past five years but don’t know who is the vice president.

Fox News[2] reports at a Democratic rally Friday in Massachusetts, Hillary Clinton’s attempt to attack “trickle-down economics,” resulted in a spectacularly odd statement, according to The Washington Free Beacon.[3]

She went on to state that businesses and corporations are not the job creators of America. “Don’t let anybody tell you that it’s corporations and businesses that create jobs,” the former Secretary of State said.

Trickle down failed? Is this pantsuit-wearing disgrace to the country trying to knock Ronald Reagan’s economy that created over 25 million jobs with a booming economy? Hillary needs to stop! She doesn’t know what she’s talking about.