SURPRISE!: A Marine & His New Bride Went To Chick-Fil-A After Getting Married THEN Guess What Happens?

Ashley lost her parents and 2 of 3 brothers as a little girl so being raised by grandma all they could afford for a treat was Chick-Fil-A. When she finally married the love of her life, Marine Officer Thomas Perrin, Chick-Fil-A gives them the surprise of a lifetime[1]. 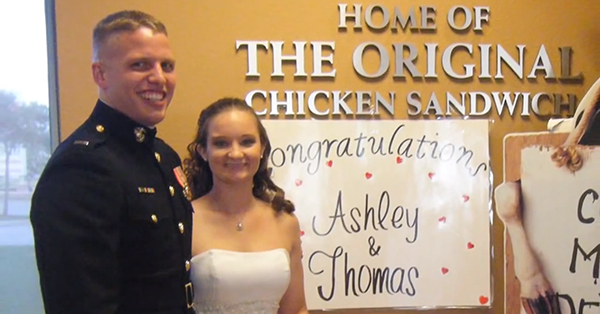 Ashley grew up without her late mother, father, and two of three brothers. So Chick-fil-A became a comfort to her during her hard times.

But then it became a sweet thing in her life when she began long-distance dating her future husband, Marine Officer Thomas Perrin. They would talk to each other during their long engagement and each get Chick-fil-A—their favorite food—in their separate locations. It was almost like they were together in the same place.

But how Chick-fil-A really impacted them wasn’t apparent until their wedding day. This story is so sweet that you need to hear them tell it!

This video tells the story where Ashley and Thomas went to Chick-Fil-A after a quick wedding and to their surprise the store employees were expecting them with decorations, wedding cake and tons of people congratulating them. Kudos Chick-Fil-A!