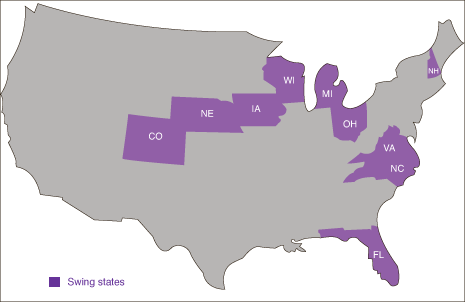 [1]Republicans are hesitant to switch from our winner-take-all state laws allocating electors to the electoral college to using the National Popular Vote. The National Popular Vote Plan would award all of a state’s electors to the candidate who wins the most popular votes in all fifty states. There is a fear that such a move will benefit Democrats, since Democrats won the popular vote even though they lost the elections in 2000 and 2016. But the truth[2] is, Republicans are likely going to lose their ability to win the necessary swing state of Florida in the future, and they can win the popular vote by campaigning differently.

The demographics of Florida are changing. More and more illegal immigrants are entering the country. Additionally, Puerto Ricans are flooding the country due to economic chaos and humanitarian crisis following Hurricane Maria at home. When they enter the U.S., because they are American citizens they can vote, and they vote overwhelmingly[3] Democrat. Hillary Clinton had an almost three-to-one edge among Puerto Ricans in Florida last year. Both illegal immigrants and legal Puerto Ricans are counted in the census which is used for determining how many congressional seats and electoral votes Florida receives. This will soon result in an increase in Florida’s electoral votes, which will lean more Democratic as increasing numbers of Puerto Ricans vote (this doesn’t even take into consideration possible illegal immigrant voter fraud).

It is true that Democrats Al Gore and Hillary Clinton won the popular vote but lost the election. But those weren’t true popular vote elections. The Republican candidates they lost to put all their efforts into a handful of swing states, and did a better job campaigning there than the Democrats. In contrast, Clinton’s campaign unwisely campaigned in non-swing states such as Arizona, while ignoring the swing state of Wisconsin. If there was a true popular vote election, the Republican candidates would run a completely different type of campaign, likely focusing on mobilizing their base in rural areas and red states. Regardless, Republicans still won the popular vote in 2004.

A presidential election using the National Popular Vote is not a radical proposal. Critics contend there would need to be a constitutional convention to amend the constitution in order to change the state-based, winner-take-all rule that most states use to send their electors to the electoral college. This isn’t necessary. The electoral college can remain. All the constitution says about electing the president is in Article II, “Each State shall appoint, in such Manner as the Legislature thereof may direct, a Number of Electors….” In order to change the system, individual states would merely need to revise state law to send their electors based on the National Popular Vote for the presidential candidates instead of winner-take-all. Currently, all states but two, Maine and Nebraska, have winner-take-all systems to send their electors to the electoral college.

Critics also claim that using the National Popular Vote in presidential elections would favor big cities over rural areas. This isn’t correct. Only one-sixth of Americans live in the 100 biggest cities. In contrast, in the current unfair winner-take-all system, only a handful of states decide presidential elections, the swing states. The 10 most rural states aren’t included, nor are 12 of the 13 smallest states. The winner-take-all system does not represent the vast majority of Americans. By the time voting results come in from key swing states, many voters on the West coast don’t bother voting because their votes essentially don’t count. This hurts minor candidates on the ballot in those states.

Under the current system, presidents shower pork on the swing states in order to get their votes. During the 2004 election, President Bush advocated for and got a trillion dollar expansion of Medicare in order to entice votes from the large population of senior citizens in Florida. Presidents take steps to help the coal industry in order to influence Pennsylvania, and the ethanol industry to help Iowa. Battleground states are twice as likely to receive exemptions from No Child Left Behind as fly-over states and twice as likely to have natural disasters declared.

There is another criticism that a rogue state secretary of state could frustrate the National Popular Vote Compact by refusing to certify the results. This is invalid, since plenty of federal and state laws prohibit that elected official from doing so.

Voter fraud will become more difficult under a National Popular Vote, because crooked party operatives will no longer be able to focus their efforts on just a handful of states, and the windfall of electoral votes for their illicit efforts will be smaller. For the same reason, it also reduces the possibility of recounts.

What did the Founding Fathers prefer? Not winner-take-all. The Founders debated various methods of the electoral college and almost adopted the proportional system at the Constitutional Convention. They never debated a winner-take-all system. As the states began to adopt winner-take-all, in order to ensure that their favorite sons like Thomas Jefferson won, Missouri Senator Thomas Hart Benton warned in an 1824 Senate speech, “The general ticket system [winner-take-all], now existing in 10 States was … not [the offspring] of any disposition to give fair play to the will of the people. It was adopted by the leading men of those states, to enable them to consolidate the vote of the State.”

So far, 11 states have passed laws implementing the National Popular Vote Compact, and it has passed in at least one chamber of 12 other state legislatures, four of which are red states. It will go into effect when enough states have passed it to total 270 electoral votes. When polled[4] (by a left-leaning polling company), 74 percent of Americans support direct presidential elections. This breaks down to 75 percent among Republicans and 78 percent among Democrats. The left naively thinks direct presidential elections will benefit Democrats, assuming that large urban areas will decide elections. This bipartisan support means there is a good chance it will happen.

The purpose of the National Popular Vote bill is to make every voter in every state politically relevant in every presidential election. This is the only way to right size the political influence of battleground states. Clinging to the winner-take-all system is a losing strategy for Republicans. Under that system, they will likely lose Florida by 2020 or 2024 due to demographical changes. It is better to take our chances with a direct presidential election than suffer certain defeat with the unfair, outdated, flawed current system that can and should be reformed.