‘This Is How I Teach Freedom Of Speech’ Flag Stomping Teacher Meets INSTANT JUSTICE!

Our Constitution protects the right of people to disrespect this nation. It’s despicable, but such policies help preserve the very foundation of freedom in America. 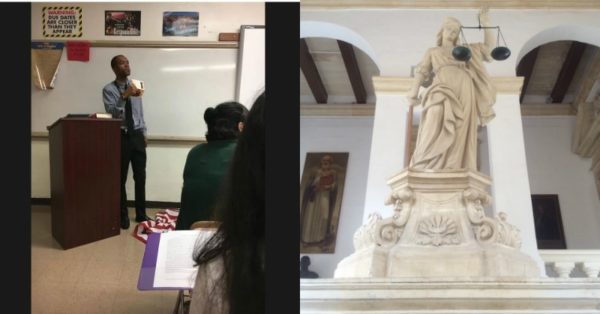 However, nowhere in the Constitution does it say that every action and speech is protected against consequences. Though one may not be jailed for speaking, that doesn’t mean that employers cannot dictate what speech is acceptable in the workplace.

As such, one history teacher who disrespected America has discovered that while his actions did not land him in jail, he has landed in hot water.

A teacher on Monday at Massey Hill Classical High School in Fayetteville, North Carolina – home of Fort Bragg and America’s Special Forces – stomped on the flag to prove a point about the value of the First Amendment.[2]

Because of this, the teacher has been placed on administrative leave while the school district investigates the incident[3].

Students reported that the teacher had attempted to burn and tear the flag before stomping on it. Several students were upset and some walked out in protest of the disgrace.

“I put it on the ground and I used my right foot and I took two steps on it, and immediately two kids get out of the room,” the teacher, Lee Francis, stated.

Francis was teaching about the First Amendment and specifically about Texas V. Johnson, a Supreme Court case that struck-down prohibitions on flag desecration.

“But this is exactly what I teach: You don’t teach kids how to think or what to think; you teach them to go their own path,” Francis said. “If they feel so convicted that this is their cause they’re going to stand for, I don’t blame them. It’s an upper-level school for those who aspire to go to college and in that regard, we have rigor and expectations, so I treat them as such.”

The school district has placed him on paid administrative leave as they investigate.

What Francis’ explanation reveals, however, is that he remains ignorant about the world he lives in. Just because something is legal does not mean that it is a good idea and it doesn’t mean that the legal act is not deeply offensive to some or downright inappropriate.

If Francis wished to teach about Texas v. Johnson, he should have done so the way countless other teachers have done: by explaining it.

Acting-out the provocative action is not necessary and unnecessarily hurtful to members of the fiercely-patriotic Fayetteville community.