When it comes to education in America, the solutions are really quite simple: expand school choice and get the federal government out of the way of local officials deciding what’s best for their district. Ted Cruz appears to be the only presidential candidate who firmly gets this principle and during Thursday’s debate, he laid-down his principles on Common Core and education[1] and he is 110% spot-on. 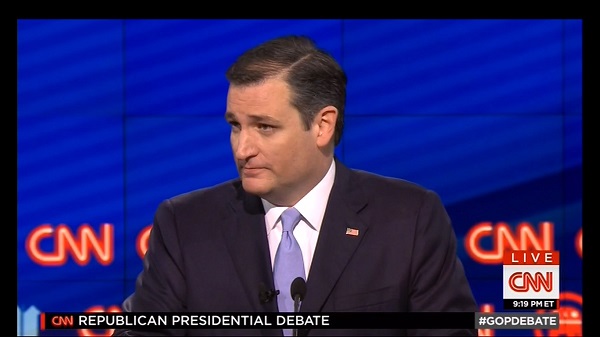 During the debate, John Kasich, Donald Trump, and Ted Cruz were asked about Common Core State Standards. Of the three, Trump barely answered the question (albeit without the specifics Jake Tapper called for), Kasich gave the wimpy “it’s all hysteria” answer, and Cruz actually identified the problem.

Common Core’s biggest problem is that the U.S. Department of Education has been using other programs like Race To The Top funding in order to more or less blackmail states into adopting the standards. There are very, very few curricula written to the standards, and the majority of the ones out there are barely comprehensible. Cruz’s plan to roll back the executive actions that have led to the abuse of education funding and eventually eliminate the Department of Education is the most sensible way to go about de-federalizing Common Core.

Good on Cruz for knowing the problem, when it’s clear the other two have no idea.

Cruz is speaking pure common sense. The federal government has abused its power to twist the arms of local leaders to implement a program that has been a disaster from day one.

Further, as the left talks about the class divisions in society, they seem compelled to do little to broaden the choices for poor communities by offering more school choice.

Ted Cruz seems to get it; the others, quite frankly, don’t.