This IS the most pleasurable political VIDEO you’ve seen in a long time! After watching GOP Debate after GOP Debate designed to make ALL of the Republican candidates look like villains and idiots, you get tired. YOU were probably so sick of it you MISSED Ted Cruz calling CNBC Host to repentance, damning ALL of the Media and explaining why America hates them! 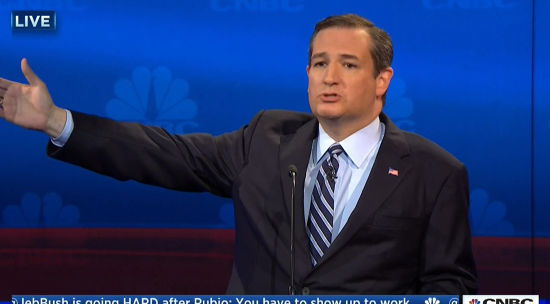 The debate, which was supposed to be focused on economics, opened up with a round of insulting questions that continued FOR A SOLID HOUR and then intermittently after that.

We’re an hour into the debate and so far, most of the questions could have been written directly by the Clinton campaign #GOPDebate

The overwhelming hostility of the moderators made it a difficult environment to operate in and only a few people did really well. Starting with…. 1) Ted Cruz: The attack Cruz unleashed on the moderators was straight out of the Newt Gingrich style of media-fu and he was solid for the rest of the debate. Expect Cruz to get a bump in the polls out of that performance.

WATCH Ted Cruz say exactly what we were all yelling at the TV. Feel free to watch it and share it hundreds of times like I have! [WATCH VIDEO BELOW— You’re Welcome!]