A baby carrot has become the dangerous accomplice of a teenager [1]who now finds herself facing assault charges against one of her teachers at her school. She had thought it was all good and fun when she acted out and threw the carrot at her teacher…but when it hit the teacher on the forehead…things go OUT OF HAND! 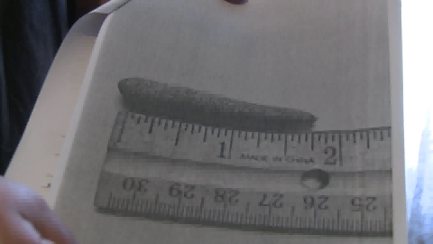 [2]
Documents show the carrot was just under 2 inches long

A 14-year old girl could be charged with assault and battery after she threw a baby carrot at one of her former teachers.

School disciplinary documents allege a baby carrot was used as a weapon in an assault and battery of a Moody Middle School teacher, according to WTVR.

“I don’t even know how to combat the stupidity,” Karrie May, whose 14-year-old daughter Aliya is currently suspended for launching the vegetable, said. May said her daughter has been out of school for a month.

“I don’t understand this,” May said. “Yes, it happened, and I can see a couple of days in school detention or even a couple days out-of-school suspension. But this goes way beyond that. We have to go to court, and her charges aren’t small: assault and battery with a weapon.”

Aliya said she left class and saw a teacher she had last year in the hallway. So, as a joke, she said she reached for a baby carrot she had stashed at lunch and tossed it towards the teacher, never thinking she’d hit her in the forehead.

“If it’s a soft carrot, it may not be as offensive,” said CBS 6 legal expert Todd Stone. “But if it’s a raw carrot, you don’t have to have an injury or show you were hurt to prove a battery. It just has to be an offensive, vindictive touch. That’s what the law says.”

Henrico Schools declined to comment on the carrot case.

Karrie May said the school’s Disciplinary Review Board sent a letter recently to try to get her daughter to admit guilt. She said they respectfully declined. Now mom said they await a summons to see what happens next.

“This could go before a judge and there could be sufficient evidence to find her guilty, but I don’t think it’s something a judge would want to find her guilty of,” Stone said. “They may offer her counseling, sort of a carrot at the end of a stick.”

This is ridiculous…so the teacher feels humiliated, and wants to ruin the childs record. Sounds like this teacher is in the WRONG job…