A Massachusetts woman who prompted her boyfriend to commit suicide in dozens of text messages and told him to ‘get back in’ a truck filled with toxic gas when he tried to change his mind, was sentenced to prison[1] on Thursday.

Juvenile Court Judge Lawrence Moniz said that Michelle Carter has been sentenced to 15 months behind bars, but the rest of the two-and-a-half years sentence will be suspended. Once she is released, she will then be on probation for five years. 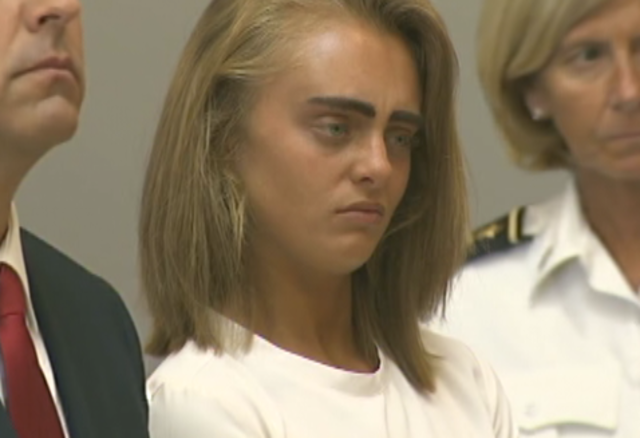 However, the judge granted a defense motion that would keep Carter out of jail until she actually runs through all of her appeals in Massachusetts. Carter was convicted in June on a charge of involuntary manslaughter by Moniz who said her final instruction to Conrad Roy III was what pushed him to suicide.

Before the sentencing came out, several family members of the victim supplied heartbreaking statements that displayed how much he is missed and called for Carter to receive the maximum punishment for what she did – a 20-year prison term.

The victim’s father, Conrad Roy Jr., wept while he read aloud his emotional statement to the court. Speaking on his sons depression:

‘We all felt he was heading in the right direction and over the worst of it. He had such a bright future and Michelle Carter exploited my son’s weaknesses. She used him as a pawn and she has not shown any remorse. Where was her humanity? How he could she behave so viciously?’

Connor’s sister Camden also stated while on the stand:

‘I will never be an aunt to Conrad’s children, he was my best friend.’

Carter was tried as a youthful offender, so there were several options on the table for the judge to choose for sentencing. He even could have committed committed her to a Department of Youth Services facility until till she turned 21.

This girl is truly a monster inside. I can’t image what her world will be like, once she’s out in public again. She has ruined her life for good.