Teen Posts SICK Video of Him Using Boiling Water To Terrorize A Cat, Then THIS Happened…

What kind of a person tortures animals for fun? A sick, twisted teenager not only tortured a cat by dumping boiling water on a cat, he actually filmed it and posted it to Facebook.[1] This man is a pure monster. 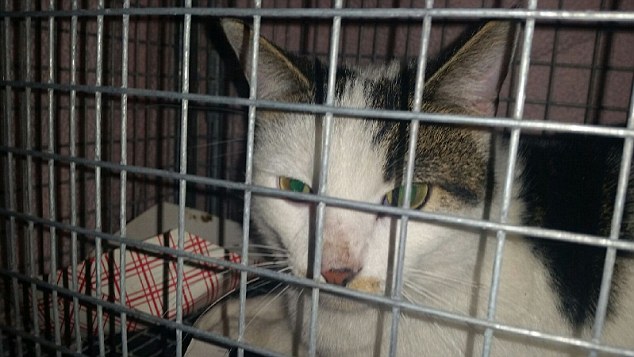 An 18-year-old from Chicago has been charged with one felony count of animal torture after a video surfaced on Facebook showing a man pouring boiling water over a cat.

Leon Teague, who lives on the 6900 block of South Martin Luther King Drive in the city’s South Side, was arrested and ordered held without bail.

He was also charged with a misdemeanor count of animal cruelty following an investigation by the Chicago Police Animal Crimes Unit and the Cook County Sheriff’s Office.

The cat, who survived the attack with singed fur and burns, is on medical hold at the city’s animal shelter until Monday.

Heather Weidmann, a 43-year-old who watched the video and cried, found the cat behind the house shown in the video with her friend, Melissa Belice.

Weidmann told NY Daily News: ‘He’s got scabbing but he’s very friendly and he’s in great spirits. For everything that he’s been through, to still come up and let us touch him and pet him, he’s pretty damn special.

Under the Facebook nickname ‘GlockBoy MurDoc’, Teague posted the sickening foootage, which initially shows water boiling in a pan on top of a hot stove.

A man carries the pot towards a window, calls the animal to come closer, and suddenly pours the boiling hot water on top of the cat.

The animal can be seen screaming and running around in a panic  while continuing to howl in excruciating pain.

The clip concludes with the man hurtling abuse at the injured animal as it attempts to make its way down a set of stairs.

The video, posted under the now-deleted Facebook account, sparked an onslaught of outraged comments on social media, and several police departments received tips and complaints from viewers.

According to the NY Daily News[4], police confronted Teague who said: ‘If you think I did it, lock me up. S–t. I know the system. If I admit to this, I’m going to jail. Glock Boy MurDoc is my Facebook name and people come in and out of my apartment all the time.’

He was ordered held without bail on Friday in Cook County Central Bond Court.

There are few things in this world so repugnant as those who hurt animals for fun. Hunt them, butcher them, eat them- that’s all fine. But torturing animals is never okay and I sincerely hope that this sick SOB never breathes free air ever again.

I refuse to be a part of increasing the amount of attention this psycho receives, so I will not be posting the video. If you wish to see it, please go to the Daily Mail,[5] but please be aware: the content is graphic!