Teen Triumphs Over Atheists: ‘Under God’ May Stay in Pledge of Allegiance 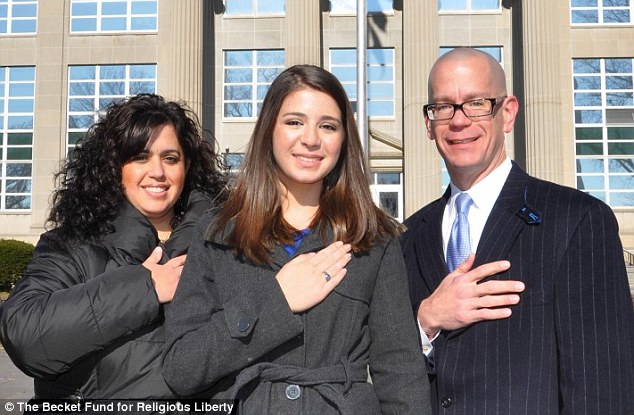 Samantha Jones with her parents

Atheists can’t just leave our schoolchildren alone. Two of them cowardly sued a school district in New Jersey under the names John and Jane Doe and their child, claiming the words “one nation under God” in the Pledge of Allegiance were “discriminatory.” Samantha Jones, a senior at a nearby high school, had enough and fought back. A judge agreed and threw out the lawsuit.[2]

In a statement released Friday, she said: ‘I’m so grateful the court decided that kids like me shouldn’t be silenced just because some people object to timeless American values.’

‘Ever since I was little, I’ve recited the Pledge of Allegiance because it sums up the values that make our country great. The phrase ‘under God’ protects all Americans-including atheists-because it reminds the government that it can’t take away basic human rights because it didn’t create them.’

Eric Rassbach, Deputy General Counsel for the Becket Fund for Religious Liberty added: ‘The message today is loud and clear: ”God” is not a dirty word. The Pledge of Allegiance isn’t a prayer, and reciting it doesn’t magically create an official state religion.’

It’s frankly time to stop the bullying. Good thing this teenage girl had more guts than the nameless parents who were too chicken to put their name on the lawsuit, pawns of the American Humanist Association which filed the lawsuit. These types of frivolous lawsuits do nothing more than harass innocent schoolchildren and waste taxpayers’ money.
Endnotes: