Ten-Yr Old Boy FEARLESSLY Defends His Village Against The Taliban, And Is Hailed A Hero, But Then….

While our president refuses to address the dangers of Islamic terrorism, one little boy in Afghanistan repeatedly showed what true heroism is as he took the fight to his oppressors. Sadly, though, he paid a steep price for his heroism as he was killed by the savages that are committed to killing in the name of Allah.[1] 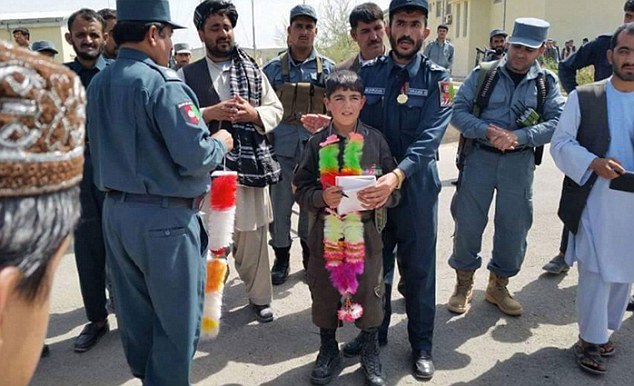 A ten-year-old Afghan [3]boy hailed a hero after he fired rockets at Taliban fighters as he helped defend his village from attackers has been shot dead by an assassin from the terror group.

Wasil Ahmad was shot twice in the head by insurgents in Tirin Kot, the capital of the Uruzgan province, local police have revealed.

The child had fought the Taliban alongside his uncle on many occasions and pictures on social media show him holding an automatic weapon and wearing uniform and a helmet.

Deputy police chief of Uruzgan province, Rahimullah Khan, said that unknown gunmen he referred to only as insurgents had killed the boy near his home.

Ahmad’s uncle was formerly a Taliban commander who changed allegiance to the government and was appointed local police commander in Khas Uruzgan district, Khan said.

The Afghanistan Independent Human Rights Commission laid blame for the boy’s death with his family, the government and the Taliban, a militant group that has been fighting a 15-year insurgency.

Spokesman Rafiullah Baidar said that local police had hailed the boy as a hero after he battled a Taliban siege following the death of his father in fighting.

‘Possibly he took up arms to take revenge for his father’s death, but it was illegal for the police to declare him a hero and reveal his identity, especially to the insurgents,’ Baidar said.

‘One side made him famous and the other side killed him — both sides ignored the law and acted illegally,’ he said.

The use of child soldiers is illegal in Afghanistan, but the charity Child Soldiers International says both government forces and insurgents have been recruiting minors for years.

In a report presented to the U.N. Security Council’s working group on children and armed conflict, the London-based charity said children were recruited by the Afghan National Police and the Afghan Local Police for reasons that included a sense of fulfilling filial duty, patriotism and honor. But the main reason was poverty, it said in the June 2015 report.

It said that in May last year the charity found that half of national police check posts in Tirin Kot ‘were staffed with visibly younger officers,’ who all admitted they were under 18 years old.

‘They had been performing all responsibilities of a police officer, which included securing check points and engaging in combat for the last few years,’ the report said.

Afghanistan ratified the U.N. Convention on the Rights of the Child in 1994, committing the country to end the recruitment and use of child soldiers.

The Child Soldiers International reports says that in Kunar, Logar and Zabul provinces — all troubled by insurgency — ’10 percent of law enforcement officials are suspected to be underage.’

Although statistics are not available, recruitment is believed to be highest where the insurgency is strongest, notably the southern provinces of Kandahar and Helmand, and provinces bordering Pakistan, including Paktiya, Khost and Paktika.

Children are also used by the Taliban in active combat, as spies and as suicide bombers, the report said. It cited a number of cases, including the attack last year on the French Institute in Kabul during a packed performance that killed at least two people and wounded another 20.

Despite a decree from President Ashraf Ghani last February criminalizing underage recruitment into the armed forces, the government had ‘failed to implement proactive mechanisms to identify, verify and release children’ who had been recruited, the report said.

Let us pray for his family and never forget what true dedication and heroism this boy embodied.

While Obama downplays the barbarity of these zealots, many throughout the world continue to suffer at the hands of groups like the Taliban, Al Qaeda and ISIS.