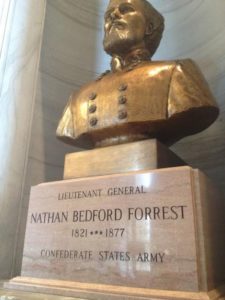 [1]Of course the corrupt media will not mention that Nathan Bedford Forrest[2] was a Democrat. In fact the Confederate flag was put up by Democrats all along the South and was defended by Bill and Hillary Clinton.

The Tennessean[3] reports the bust of a Confederate general and leading figure in the early days of the Ku Klux Klan should be removed from the Tennessee statehouse, top Tennessee Democrats and the state Republican Party chairman said Monday.

“Symbols of hate should not be promoted by government. South Carolina should remove the Confederate battle flag from its Capitol, and Tennessee should remove the bust of Forrest inside our Capitol,” Cooper said in a statement to The Tennessean.

Fitzhugh said he believes the bust should be displayed in a museum.

“In general, our Capitol should be representative of the people of Tennessee. Right now if you’re a young girl, like my granddaughter, Marley Mac, for instance, and you visit the Capitol, there are no busts in the building that look like you,” Fitzhugh said.