Tennessee Lt. Gov. Ron Ramsey Tells ‘Fellow Christians’ That They Should Arm Themselves

As more news comes to light about the Oregon shooter targeting Christians, Tennessee’s Lt. Gov Ron Ramsey took to Facebook to tell fellow Christians in the state that they should be armed[1] and on alert. 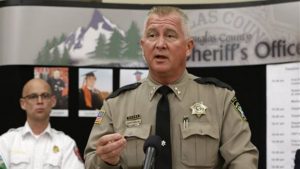 In his Facebook posting, Ramsey, who is also speaker of the Tennessee senate, said the recent spate of mass shootings around the nation is “truly troubling.”

The Blountville Republican said, “whether the perpetrators are motivated by aggressive secularism, jihadist extremism or racial supremacy, their targets remain the same: Christians and defenders of the West.”

“I would encourage my fellow Christians who are serious about their faith to think about getting a handgun carry permit,” Ramsey wrote. “I have always believed that it is better to have a gun and not need it than to need a gun and not have it. Our enemies are armed. We must do likewise.”

It is encouraging to see at least one public official in the country stand up to the intolerance towards Christians instead of backing down.

Now if only this could be coming out of the White House. But, with Obama, we know that will never happen.