PATRIOTS ARE OUTRAGED As Muslims Start Nationwide Campaign To Change The Flag, Because “It’s Offensive”…

Muslim group behind this IDIOTIC attempt[1] at making an entire Nation bend to their demands is known as “Secondos”, united to change the flag because it is not “to the Muslim faith standard” and that “offends” them. 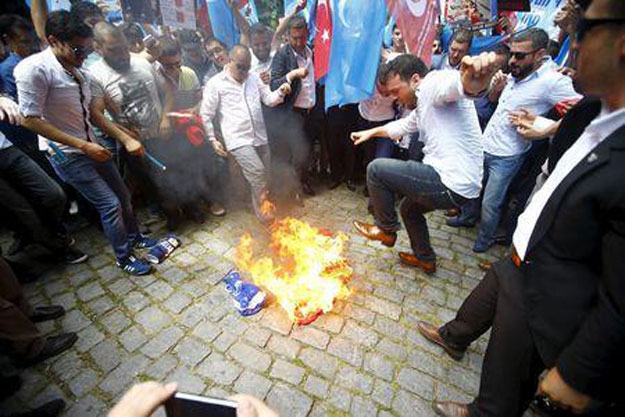 Gatestone Institute reports:
The proposal to change the Swiss flag has been met with outrage across the political spectrum and is sure to fuel anti-immigrant sentiments in Switzerland.

Muslims in Switzerland are demanding that the white cross be removed from the Swiss national flag because, as a Christian symbol, it “no longer corresponds to today’s Muslim multicultural Switzerland.”

Sylvia Flückiger, a counselor with the conservative Swiss People’s Party (SVP), said the demands are: “Totally unacceptable. With our Swiss flag there is nothing to change. The next thing you know, they will demand even more, that we change our constitution.”

Marianne Binder, spokeswoman for the center-right Christian Democrats (CVP), said: “This is just what was missing, that we need to change our flag. The Swiss flag is part of Swiss identity, precisely because it is inviting for all to want to be involved…even the immigrants.”

Stefan Brupbacher, general secretary of the libertarian Free Democrats (FDP), said: “This is utter nonsense. The Swiss cross is an extremely successful and valuable global brand. It is a symbol of success and quality. We will tightly hold on to it, out of love for Switzerland.”

MP Oskar Freysinger is the Donald Trump of Switzerland:

As Oskar Freysinger said, if a battle is lost to them, there is no second chance, they do not give back what they have conquered. Clearly.. What coexisting means to them, is not what it means to everyone else, as the facts of this story show us.