Their latest tirade against the history books is when a Navy ship was named after[1] a US president. Oh the horror! 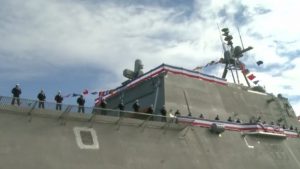 The commissioning of the USS Jackson, a littoral combat ship, has stirred the ire of the NAACP and a leader for the Cherokee Nation.

The ship is named in honor of Mississippi’s capital of Jackson, which in turn was named for the nation’s 7th president, Andrew Jackson. Jackson, like several of the early American presidents including George Washington, Thomas Jefferson and James Madison was a slave owner.

So now all US presidents are offensive and racist?