The New Non-Lethal “Home Defense” Weapon Liberals Are Pushing… Make Sure You Don’t Buy This!

The left is obsessed with discovering a new, non-lethal alternative to firearms. The second one is available, the new discussion will be: “Why do you need a firearm? There are non-lethal options available!” Now, the latest “new alternative” is a pepperspray-shooting gun. Take a look:[1] 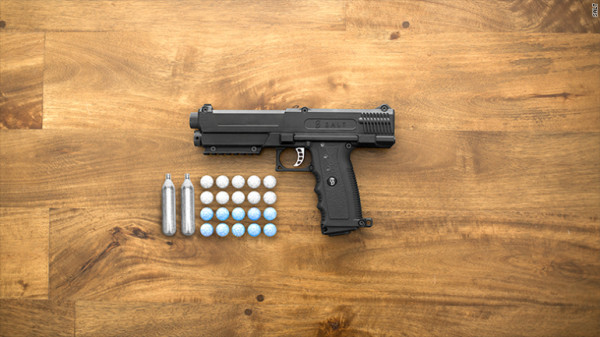 If like me you are anti-guns, then this new invention could make you feel safe without the need to carry a proper firearm. The weapon, which recently appeared on crowdfunding site Indiegogo, is described as a nonlethal home defense solution. So what can it do to dislodge the gun-nuts?

The Salt gun (which doesn’t actually shoot salt) is essentially a paintgun that fires paintballs filled with an incapacitating pepper extract. Clever. Each Salt gun is powered by a single CO2 cartridge and holds seven balls. Upon impact, the balls explode and create a five foot spray of pepper extract.

So what will the effects be of the Salt gun?

According to the inventors it will “cause the lungs to constrict as they would during an asthma attack.” Nice. It’s also worth remembering that, like pepper spray, it will also inflict blinding, incredible pain to the eyes. In short, it’s not lethal, but it f*ck you up.

It’s important to make clear that the Salt gun is not classed as a firearm. The new gun doesn’t use an “incendiary firing mechanism”, instead, a burst of pressurised CO2 forces the ball out the barrel.

Would-be burglars will still be scared of the weapon though, purely because it looks so much like an actual gun. The weapon features aiming sights over the barrel, a skeletonised trigger, and a Picatinny rail for mounting accessories, such as a light or aiming laser under the barrel. I’m not sure why you’d need a laser if you’re purely defending your home, but the device still does the job.

The problem remains however, how do you make these weapons safe to have around the home? According to the Centers for Disease Control, an average of 62 children a year under the age of 14 are killed in accidental firearm discharges. Salt’s CEO Adam Kennedy states, “You should feel comfortable having this by your bed, because your kid can’t kill himself with this.”

I’m not sure Kennedy really understands the point of the debate. While we understand that these weapons will not kill any children, they will still be hugely dangerous. In a study of 63 pepper spray deaths conducted on behalf of the National Institute of Justice, two deaths were blamed on a combination of pepper spray and asthma—the rest were blamed on a combination of the pepper spray, drugs, and victims accidentally asphyxiating themselves. In short, the Salt gun can not guarantee there will be no fatalities in your home. Think of that before you consider buying one please.

Call me old fashioned, but I will never trust my life or my family’s life to pepperspray; give me a .45 ACP any day.