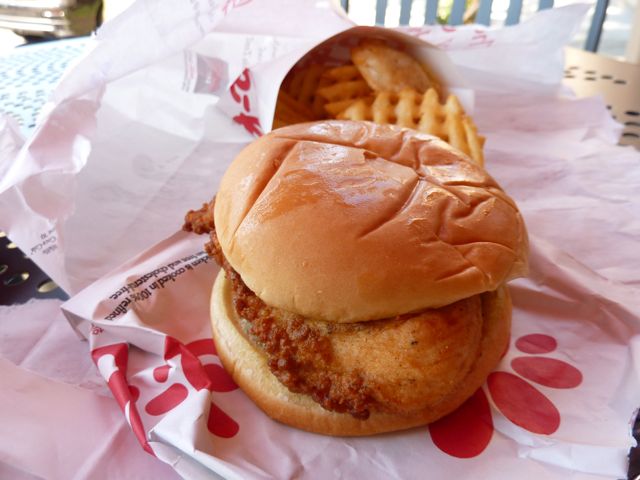 [The school] suspended a group of students for using Twitter during school hours to call out two students wearing Chick-fil-A shirts during a Gay-Straight Alliance event, parents and students said.

The suspended students felt the T-shirts were offensive because of widely publicized comments the fast food company’s president and CEO, Dan Cathy, made in 2012 against gay marriage.

The two students were part of a televised broadcast of the school’s daily announcements. Offended students took to Twitter to express their thoughts, with the tweets against the two students continuing over the weekend.

One student tweeted to another who had criticized one of the students who wore the shirts:

“You’re expressing your feelings … Why can’t he?”

“Being an offensive [expletive] is not expressing your feelings.”

One of the suspended students tweeted:

“Shout-out to the [expletive] in the Chick-fil-A shirts.”

The mother of that suspended student weighed in with her opinion as well:

“You want to encourage everyone to be their own person, and for someone to decide it’s OK for those two students to go on a morning show and wear a shirt like that with no repercussions, what is the school saying? That it’s OK?”

Perhaps the school was saying those students had every right, under the First Amendment, to wear the shirts?

Kudos to the school for not allowing the students to be harassed for exercising their rights. Their shirts weren’t against any school dress code, and not advocating any kind of hate or discrimination, and the school was right to protect them from cyberbullying.