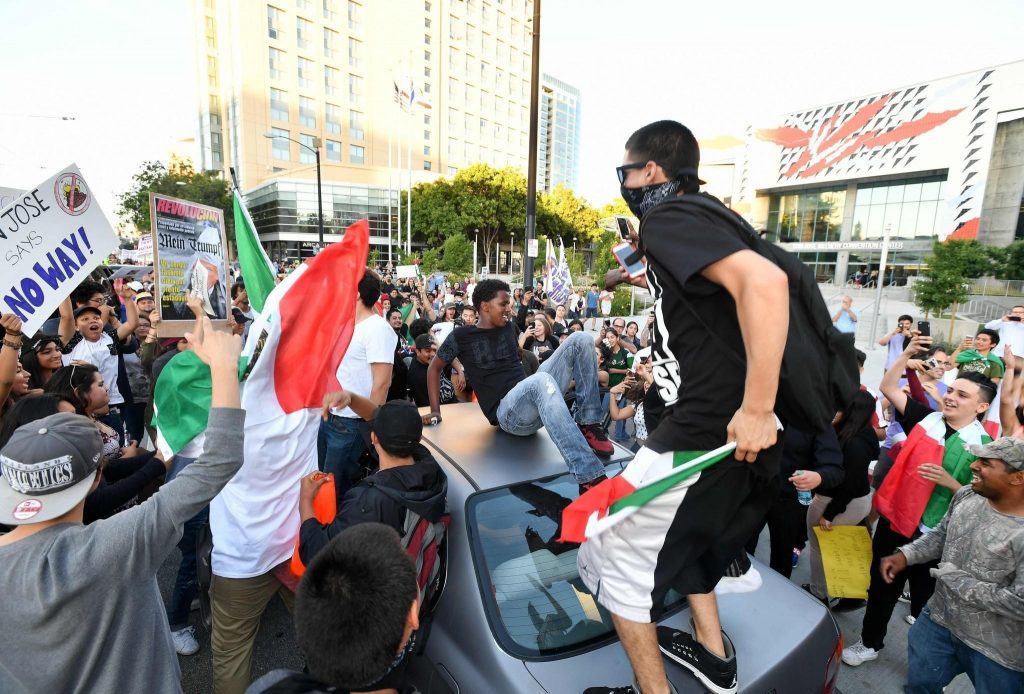 [1]The American left is currently undergoing a phase of greatly exaggerating its responses to the right. Everything is treated as if it’s at a crisis level, frequently “necessitating” the use of violence in response. Billionaires on the left like George Soros encourage and enable this, by paying to educate young leftists on how to use violence against the right. The Daily Caller News Foundation compiled a shockingly long list[2] of violent acts that have been committed since Donald Trump was nominated for president by the GOP at the Republican National Convention.

Former President Barack Obama helped bring about this rise in hostility, by dividing the country with inciteful rhetoric. He was the first president to bring Saul Alinsky’s Rules for Radicals into the mainstream as normal political discourse. Setting the groundwork[3] for the creation of the violent organization Black Lives Matter may be Obama’s most prominent accomplishment. That group has done more to destroy race relations in this country than anyone in at least 50 years.

Yet how dire are circumstances for the left today? Trump isn’t much of a conservative. I like the way he’s run the country since becoming president, but he’s not right wing. Ted Cruz and several others who ran against Trump in the GOP primary qualify as right wing. Instead, Trump is a populist, reflective of his background which is much more moderate and included being a Democrat for several years. Many conservatives have deserted him already because of what they see as capitulation on the border wall with Mexico, repealing Obamacare and more.

Trump’s daughter Ivanka and her husband Jared Kushner aren’t conservatives either. They have both taken significant roles in the Trump administration. The left went after Ivanka quite viciously, pressuring Nordstrom to drop her clothing line. But let’s look at her politics. Vanity Fair said[4] she sounded like a Democrat in her speech at the Republican National Convention. She and her husband reportedly[5] pressured her father not to pull out of the Paris climate agreement. She advocates[6] for women’s issues that feminists champion. She tweeted[7] in honor of LGBT month. In 2007, she donated $1,000 to Hillary Clinton’s presidential campaign. She contributed $40,000 to Democratic New Jersey Senate candidate Cory Booker in 2013, and even threw a party for him. She has always been a registered independent, and didn’t switch her voter registration in time to Republican in order to vote for her father in the New York primary election last year.

Ivanka’s husband is a lifelong Democrat. Kushner supposedly had an ideological conversion in 2015 when he began supporting Trump. But recently, he reportedly[8] met with key senators to discuss criminal justice reform, which is usually just a euphemism for loosening up criminal laws.

The violent protests in academia are at an all-time high, not seen since the 1960s and early ‘70s. Yet academia has lurched to the left in recent years. Conservative courses and professors continue to dwindle. Left-wing groups on college campuses have increased. Policies have been put in place silencing conservatives and expanding the presence of left-wing speech.

So where was the massive reaction by the left during the 1980s and 1990s in academia, when the universities hadn’t moved as far to the left yet? That’s right, there wasn’t any, because the reaction now is fake outrage. The left successfully got what it wanted in academia, mostly stamping out conservatism. There’s nothing left to do but squash a handful of remaining dissenters here and there. Label the right Nazis and fascists in order to incite rioting. The left knows if it doesn’t use drastic comparisons like that, students won’t believe them that the universities are really horrendously oppressive.

There are so few vocal conservatives left in academia that the left has been forced to broaden its crosshairs to target black conservatives, gay conservatives and libertarians. Incredibly, even this broader brush is still being expanded; now to their own, left-wing professors who dare to speak out against the targeting. Michael Rectenwald[9], a self-described “left-liberal activist” and professor at New York University, almost lost his job over an anonymous Twitter account he ran denouncing left-wing censorship. He has since left his former comrades, declaring, “Goodbye to the left, goodbye.” There are many more instances like this.

This use of violence is frankly a slap in the face to black protesters like Martin Luther King, Jr., who engaged in generally peaceful civil disobedience in order to take on a righteous cause, the second-class treatment of blacks. Today’s unhinged violence by spoiled leftist Millennials who are surrounded by echo chambers everywhere in society is embarrassing, dangerous and out of control. Where is it going to end? Rounding up conservatives and prosecuting them, suing them out of business and destroying their reputations so they can no longer make much of a living? They’re already doing that. And don’t forget physically injuring them.

What it comes down to is the radical left is deliberately trying to incite law enforcement, in order to say, “See, we were right, this is fascism destroying our free speech.” But the reality is, violence and shooting[10] conservatives is not free speech. Law enforcement stopping anarchy is not shutting down free speech. So far, the left has undergone most of its violent rampages in large blue cities and left-wing universities, where law enforcement has been told to mostly ignore the violence. But at some point, the left is going to figure this out, and take on a conservative venue…