This Could be the REAL REASON Obama Vetoed Keystone Pipeline 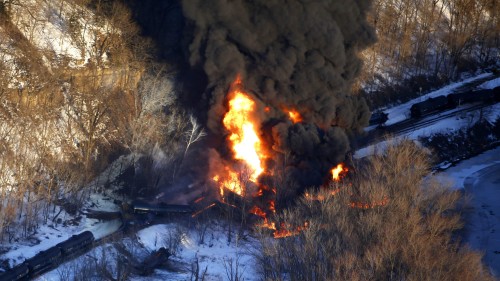 When does a Presidential veto look like nothing more than a loyal payback [2]to a political ally? When the veto is of the Keystone Pipeline…again. The Left is always quick to point the finger at everyone else but when it comes to their guy appearing to play favorites to the point that America loses countless jobs, they have nothing to say. Do you think this well known ally of Obama benefits from the convenient veto of his competition?

Back in March 2013 we wrote a post presenting “the new US petroleum pipelines[3]” in which we explained “why crony capitalist #1, the “rustic” Octogenarian of Omaha, and Obama tax advisor #1, Warren Buffett has been aggressively attempting to corner the railroad market, while the administration relentlessly refuses to allow assorted new, and very much competing petroleum pipelines [4]from America’s neighbor to the north to cross through the US.”

It also explains why after Buffett’s purchase of Burlington Northern Santa Fe (BNSF) in 2009, Obama has been so staunchly against allowing the Keystone XL pipeline: because if there is anything that would allow Buffett to preserve the momentum of his soaring oil transit business, it is maintaining a veto on any competing pipelines. A veto which Obama implemented for the latest time just a few days ago.

Of course, it would be uncouth of the US president to say that he is against a pipeline because one of his crony backers, his tax advisor (“push income tax higher all you want, but don’t you dare touch that capital gains and dividend tax”), and perhaps the biggest single beneficiary of the government bailout of Wall Street in 2008, tells him to. So instead Obama, to appease his progressive rank and file, decided to crack down on the “danger” of pipelines – after all, the world is riddled with horror stories about the tens of thousands of miles of US commodity pipelines spontaneously combusting, exploding or otherwise blowing up and destroying the pristine nature all around them.

Maybe not, but that’s where the “unbiased” media comes into play. The same media which we doubt will have much if anything to say about the train derailment, crash and subsequent massive explosion which took place at 1:20 pm in a rural area where the Galena River meets the Mississippi.

The train in question? One of Warren Buffett’s own: a BNSF Railway freight train loaded with crude oil.

BNSF said the train has 105 cars, 103 of which were carrying crude oil. The other two cars were buffer cars loaded with sand. A release from the Jo Daviess County Sheriff’s Department confirmed it was Bakken crude oil.

Obama needs to explain his veto without resorting to the usual smoke and…oh, was that a poor word choice given the billowing black smoke of Warren Buffett’s oil train derailment? People who understand what the pipeline means for hard working Americans are not fooled by Obama’s talk of “environmental concerns”. We know he has other motives, and they have nothing to do with nature.