When people think about animals that put humans in the hospital, most often you’ll think about dogs, bears, wild hogs, cows, horses, and other such creatures. You probably wouldn’t imagine a SQUIRREL[1] doing severe damage to a human, but it has happened. 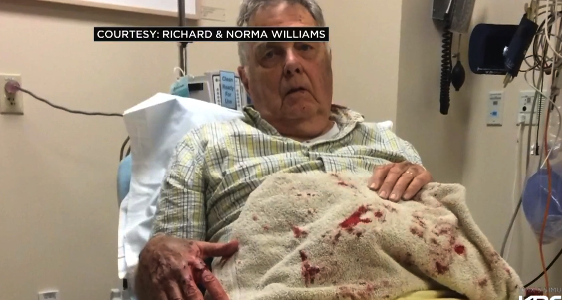 NOVATO, Calif. — An elderly couple was rushed to the hospital after being viciously attacked by a squirrel, according to KPIX.

87-year-old Richard Williams was doing chores in his garage when a allegedly squirrel entered — through the open garage door.

“All of the sudden, he charged me and jumped, and from then on, the battle started,” Williams said, according to the TV station.

Williams described the squirrel in the bloody struggle as vicious. He said the animal was clawing and scratching him.

The squirrel allegedly tore Williams’ head, arms and legs, and his glasses were smashed.

Norma Williams said she hit the squirrel with a broom. At some point, Richard Williams reportedly grabbed the squirrel by the tail and threw the animal on the garage floor.

A neighbor rushed the couple to the hospital where they got dozens of shots, including vaccines for rabies and tetanus, according to the TV station.

The same squirrel is suspected in five other attacks in two weeks. A teacher and student were attacked at an elementary school.

This is one seriously angry squirrel. He needs to be relocated or eliminated before another attack happens.