There’s at least one man in the country, besides Donald Trump, who is saying what everyone else is thinking.

Evangelist Franklin Graham is standing firm in his call to the US government that all immigration of Muslims into the country end[1] for the time being. 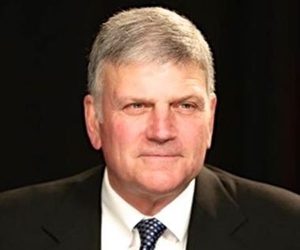 Until ongoing terror threats subside, Graham says we shouldn’t let anymore Muslim immigrants into our country. He defended that stance in an interview with The Church Boys podcast this week.

“By letting Muslims come into this country at this time [there’s] the potential for some of these people to turn on this nation for our kindness and our gratitude and commit murder,” Graham said in an interview at TheBlaze’s New York City newsroom on Wednesday. “And it’s not just the murder of just one or two, but it could be a large event that could take the lives of many people.”

What do you think? Should Muslim immigration stop in the country at least for now?