It is said, usually jokingly, that we all have a look-a-like that looks exactly like us somewhere in the world[1]. You’ll just never meet the person because that would be insane[2], right? Right?! 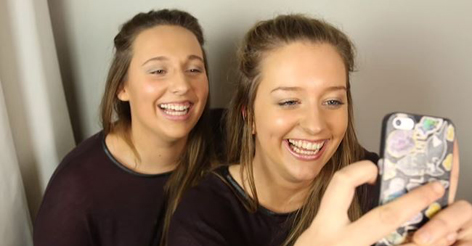 Two people who can call off their search missions are Ciara Murphy and Cordelia Roberts. The pair, who met in Germany, should probably make a call to their parents because I’m pretty sure they were separated at birth.

Ciara from Wexford, Ireland, was studying in Breman on a year abroad when she found herself constantly being asked by classmates if she had travelled over with a twin. She told the Irish Mirror, “When I was going on nights out, people were starting to ask me did I come here with a sister, or a twin. I didn’t know what they were talking about in the beginning, so I was just like ‘No I’m completely on my own out here.’”

At the same time a similar thing was happening to Cordelia, from the UK. So the pair, dubbed by people at college “the twins”, decided that they would get together to see what all the fuss was about. Needless to say they were probably as shocked as you were, if not more, by the fact that they really do look the spitting image of each other.

The two are now said to be inseparable. And of course, they’ve got to take selfies!