This is a hilarious joke that sums up the state of the public education system in the US! Too good NOT to share:[1] 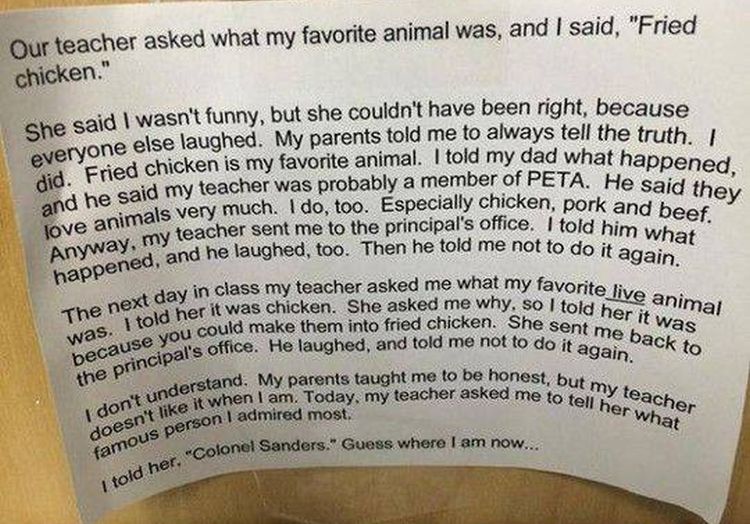 Life is full of hardship and difficulty at American University.

The Washington D.C., school – which is ranked 72nd in the country and has a tuition of more than $43,000 per year – is replete with depressed, marginalized and racially oppressed students who need to be coddled, cuddled and spoken to in low, hushed tones so as not to trigger some sort of mental episode.

It’s not a fun place to be, so during the campaign to elect a new student body president, the candidates spoke about the interminable needs of these delicate flowers, The Eagle reported[3].

One candidate – Matt Mullin – said the counseling center should be open 24 hours per day, seven days per week – you know, for those 3 a.m. Sunday “triggering” events like a rerun of “Gilligan’s Island.”

Another candidate – Devontae Torriente – who was behind the creation of a “microaggression reporting portal” said he wants more minorities on faculty because … well, skin color makes all the difference.

I’ll be the first to admit that as a white man, I have not experienced racism, and I never will experience racism,” Mascaro said during the debate. “So, I am not the person who should be leading the charge on this issue. I have to lead from behind.”

At times there were “snaps of encouragement” from the audience. It’s enough to give you douche chills.

[email protected][4] says @willgetserious[5] is wrong in saying @AUSG[6] is inclusive, to snaps of agreement from @dvntae #AUSGDebate[7]

Will Mascaro did take the lead on one important issue: Making sure that students accused of sexual assault are not protected by any confidentiality. That way as soon as someone makes a complaint, the male student can be tagged and labeled a rapist without any evidence at all.

Way to lead the charge, Will.

By the way, while they’re screaming for more diversity and inclusion, American University is one of the most racially diverse colleges in the country. More than 45 percent of the student body are minorities and almost 35 percent of the faculty are non-white.

All in all, it was a bunch of whiny students promising more coddling and inclusion at a school that costs more than most people make in an average year.