This Must Be the Most Embarrassing Moment on ‘Family Feud’ EVER!

With the introduction of modern day on-demand t.v., netflix, and hulu[1]…filler shows on cable, such as game shows have taken a HIT on ratings…there just isn’t as many people watching cable anymore. So…they had to step it up, and on the popular game show “Family Feud”, they did just that, by spicing things up. Now, some people are outraged that the show may not be very FAMILY friendly anymore. 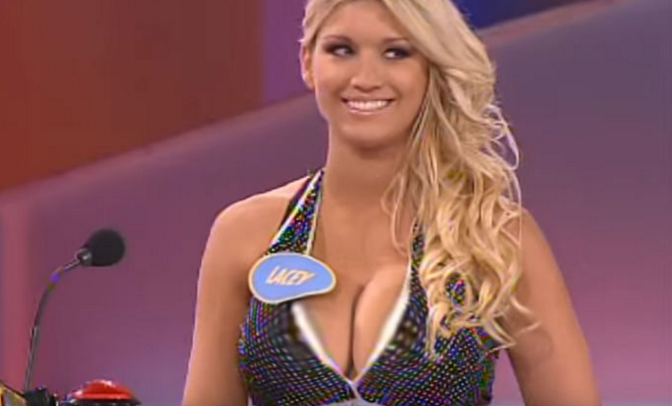 Family Feud has dealt with this by asking hilarious but controversial questions – like when Steve Harvey asked a man to name something that gets passed around. But that’s nothing compared to what he asked a family of wrestlers recently, leaving everyone in the audience stunned!

These show writers must really be running out of material because this question isn’t even really that funny, pretty much as low-brow as it gets. I suppose that makes sense for an episode where they claim to be featuring a “family” of wrestlers.

“Name something you might see a squirrel at the park doing with his nuts”, Harvey asks with a completely straight face.

“Eating nuts!” yells one of the contestants, a scantily-clad blonde with a flirty smile. That was good for number two, but with the number one answer still out there her opponent had a chance.

That opponent turned out to be a leopard-printed, mullet-haired man – just a walking fashion disaster. He throws out, “storing them”, good for number one and earning his team the question – only to pass it off to the women’s team.

Make sure to watch the clip below to the end if you want to hear what these beautiful women have to say about squirrels and their nuts!

Does Family Feud still sound and look like a very family friendly show to you?