While European Union nations such as Germany and even France are allowing the engineered “refugee crisis” to flood their nations with hostile Muslims — and demanding that all E.U. countries welcome their “fair share” of the disastrous flood, one nation is standing against the insanity. The country of Poland…WILL go down UNITED and fighting if necessary.[1]

With massive crowds as large as 170,000 strong, Polish patriots marched through their capital to demand an end to Islamic immigration — the “largest demonstration in Polish history.”

Poland isn’t just going to take the Islamization of Europe without a fight. They are sick and tired of letting their culture be stolen away from them…so this is what they did.

First check out this incredible photo: 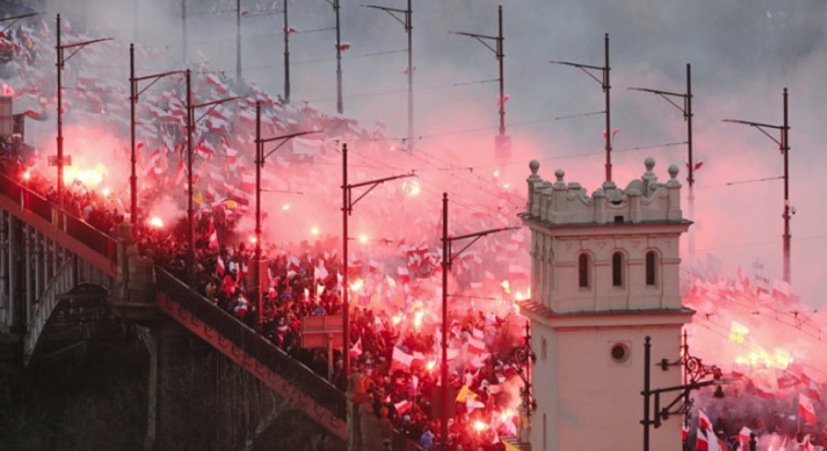 Did you hear about this on CNN? You did not, because they completely censored it from American eyes, lest they be inspired to stand up against Obama’s sinister plans to import up to 200,000 so-called “Syrian refugees”, despite the FBI’s warning that the Feds can’t properly screen them.

Described as the ‘largest demonstration in Polish history’, over 100,000 Polish nationalists took to the streets yesterday in the city center of Warsaw against immigration into Europe and the European Union—and in particular against the latter’s demands that Poland “absorb” Muslims who have flooded into Germany over the past few months. Protesters referred to the immigrants as “invaders”.

The massive demonstration—the largest such event yet in Poland—comes only two weeks after the populist Law and Justice party, described by the controlled media as “right wing”—convincingly won elections in that country, forcing out the previous administration which had not taken a firm enough line against the invasion of Europe.

Here is some incredible footage of the demonstrations, which lasted for several days, and which are only now being reported in the U.S. after days

Over 100,000 Polish Patriots March through Warsaw to demand an end to Islamic Immigration. #Anonymous[6] #Paris[7] pic.twitter.com/jvpjOgByII[8]

They showed incredible solidarity with the French victims of Muslim terror:

What could be more in opposition to open-border Progressives than Christianity and nationalism?

How dare media try to keep this from us, those snakes. Give them hell Poland.