This SHOCKING new information about the female jihadist from the San Bernardino Christmas party massacre will lead Republicans to demand a full halt to Barack Obama’s plans to import tens of thousands of Syrians [1]into the U.S. 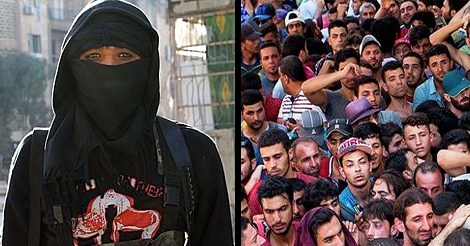 As CBS News reported, Tashfeen Malik, the Pakistan-born wife of attack ringleader Syed Farook — whom he married in Mecca — passed a full Department of Homeland Security counter-terrorism screening before the Obama DHS issued her a K-1 (“fiancée”) visa:

And according to analyst John Binder, it should never have been issued at all:
Tashfeen Malik, the female terrorist involved in the San Bernardino attack should have never been granted an American visa if the Immigration and Nationality Act holds any weight.
Malik, who was found to have a Pakistani passport, obtained the K-1 visa in Islamabad, Pakistan. However, American visa laws that are meant to detect potential terror threats trying to infiltrate the country should have blocked the female jihadist from obtaining that visa.
As the Center for Immigration Services notes, Section 214(b) of the Immigration and Nationality Act states that “individuals who appear likely to overstay their temporary visas and try to settle permanently in the United States are not to be issued one.”
In addition, many are pointing out that if a rigorous screening process against known background databases (Pakistan, Saudi Arabia) was not enough to keep out a potential terrorist, then how can Obama possibly promise to weed out jihadists among tens of thousands of Syrians — for whom no records from that country exist?

The simple answer of course is: they can’t. And Republicans ripped into Obama for it:
“We are dealing with an enemy that has shown it is not only capable of bypassing U.S. screening, but of recruiting and radicalizing Muslim migrants after their entry to the United States,” Sens. Ted Cruz (R-TX) and Jeff Sessions (R-AL) wrote to Homeland Security Secretary Jeh Johnson, Secretary of State John Kerry, and Attorney General Loretta Lynch.

Now reports say that Cruz and Sessions have demanded that the Administration release the entire immigration records of the San Bernardino jihadists. So far, Obama officials have not responded to this request. Do you think they will?