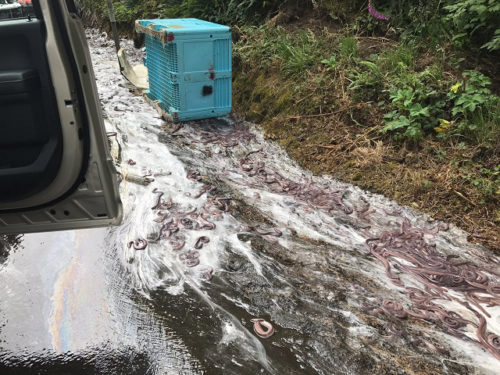 Oodles and oodles of eels[2] and squeals as an entire truckload of the slimy creatures overturned on an Oregon highway. The slippery flood of hagfish oozed all over the road, into the ditches and caused a four-car pile-up. No humans were injured, but lots of eels were.

Headed for dinner tables in South Korea, 7,500 pounds of eels made their getaway attempt in broad daylight as they were apparently able to tip the truck over and make a slither for it. No, not really. What actually happened is the driver of the truck didn’t stop for a construction site and the box holding the eels fell off into the road, hitting a car and spilling the live cargo all over the highway. Unfortunately for most of these supposed delicacies, they ended up getting removed by a bulldozer. But perhaps a few sneaky slippery ones made it into a local stream or two. Shudder.

The hagfish is known for its dense slime that is so slippery and strong it enables them to escape predators. They are parasites of the ocean, which burrow deep inside the bodies of victims to eat them from the inside out. Pretty nasty.

The real question is, what do these drivers tell the insurance company? That they’ve been attacked by hagfish, or overrun by eels? The mechanics will surely have a field day when they have to pull eels out of the undercarriages of the cars. And the smell of rotting slime eels isn’t going to be too pleasant either. Of course, when life hands you eels, you could just make eel soup. That’s where they were headed anyway. Wonder if any of the cleanup crews took some home for dinner? Word has it they are delicious grilled, with a special sweet eel sauce. Or maybe just throw a bunch in the slow cooker for the family. It’s sure to be a hit! Not.