Three movers hide a woman in their truck, then become heroes [VIDEO] 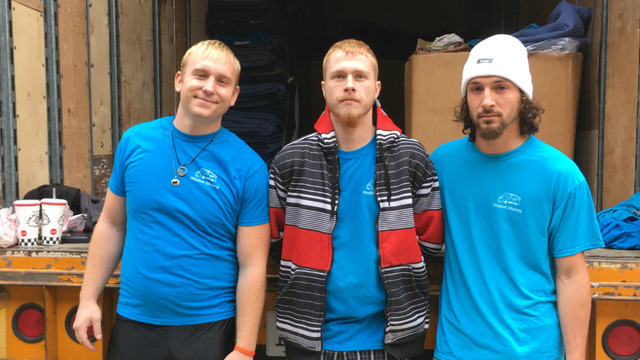 These men are being called heroes.[2] And I am sure to the woman who they had a hand in saving the life of, that is exactly what they are to her. They are responsible for saving her life when her ex-boyfriend was trying to kill her. They were outside the moving truck when a woman came running towards them.

“We were just sitting there talking and all of a sudden she had came up to the side of the truck and she was really like frantic hysterical, freaking out like I need a phone, I need a phone right now to make a phone call, someone’s shooting, they’re shooting at my office,” said Mike Zaininger, with Wisdom Moving.

One of those movers, Cody Grant, explained where they hid. He said they were able to take cover based on the way the truck had been parked and the way some boxes had already been loaded.  “Specifically, we had like a big box here, right here we had another box, right here all four of us were standing right here talking while she was hysterical you know,” He stood inside the back of the truck that saved the woman’s life while recollecting the experience.

Another worker, Josh Lara, explained how lucky they were that everything worked out the way it did. He also tells of the fear they had while hiding from the gunman. “So if we were facing the other way, the guy would’ve saw all of us, so it was very, very lucky that our truck was facing the certain way because the truck was basically a lot of protection today,” Josh then continued, “the only thing that we were worried about was where the shooter was located because we knew he was close but no one wants to poke their head out to find out.”

Luckily everyone of those individuals were safe.