A homicidal thug thinks prison life is unfair[1]. At the risk of sounding like Captain Obvious, it’s SUPPOSED to be unfair, genius. It’s SUPPOSED to be almost as unfair as SHOOTING AND DISABLING A FIVE YEAR-OLD GIRL FOR LIFE. No matter how “unfair” prison is, it can never be as unfair as trying to kill a little girl. Deal with it. 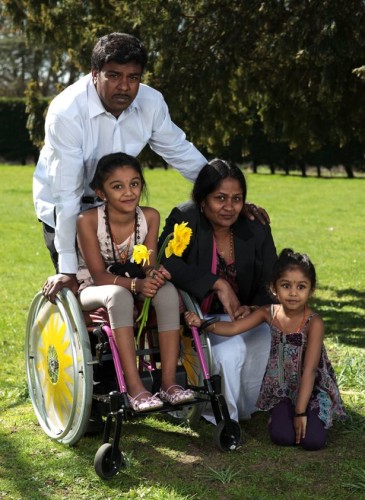 A gangster serving a life sentence for shooting a five-year-old girl has complained he is being treated unfairly by jail bosses.

Kazeem Kolawole – convicted along with two others for grievous bodily harm and the attempted murder of little Thusha Kamaleswaran – says staff are refusing to let him visit pals in other cells.

In a crime which shocked Britain, the gang shot Thusha as she played in a shop in Stockwell, south London, when they were hunting a mob rival five years ago.

Now Kolawole, 23, has written a self-pitying rant from his cell at maximum security HMP Long Lartin, Worcs, claiming he has been unfairly branded a “trouble ­maker”.

He said, in a letter to prison mag Inside Time, that the situation was causing him “stress”. He wrote: “This is detrimental to a person’s mental health.”

Thusha, from Hainault, North East London, suffered life-changing injuries. She was hospitalised for more than a year and confined to a wheelchair.

This guy should have zero ability to speak to the public. He has no business complaining about anything. He can still walk. Which is more than his victim can say. A sweet and beautiful girl is confined to a wheelchair because of his itchy trigger finger. Time for a reality check. What if this had been your daughter and you read his “complaint” letter?