The thug who knocked out a homeless woman found he wasn’t quite as tough when karma threw down some JUSTICE[1], when he did THIS! 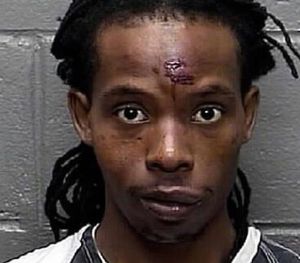 Ibn Hunter, 25, reportedly lunged at an officer during a strip search Monday after being arrested for the attack of the homeless woman that he filmed and posted to the Internet, according to the New York Daily News.

Unfortunately for Hunter, the police officer proved to be a lot tougher than a homeless woman.

Hunter was injured by the officer and his booking photo shows him with a large gash on his forehead.

Congratulations Sir…you’re an even bigger idiot than previously thought.