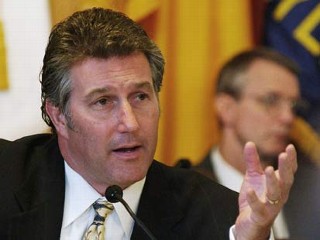 [1]The case of the corrupt prosecution against imprisoned former Congressman Rick Renzi continues to explode with new evidence of wrongdoing – literally every few weeks something else comes out. It is beginning to look like Fast and Furious as more information pours out implicating the government.

As I’ve explained previously[2], the crux of the case against Renzi was he had proposed a federal land exchange that allegedly would have benefited himself. Evidence came out during the trial and especially afterward revealing this wasn’t true. The FBI offered to give money to the government’s key witness/”victim,” Philip Aries, to change his story and say the land exchange was Renzi’s idea. The DOJ prosecutor, Gary Restaino, whose wife worked closely under Janet Napolitano[3], never disclosed this information to the defense.

As more evidence came out about this collusion in July, U.S. Federal District Court Judge David Bury granted a hearing to consider a new trial. I attended the hearing,  where I met several of Renzi’s 12 children, who have developed into impressive young adults, sure of their dad’s innocence. I was shocked by what I heard[4] as Aries and the main FBI agent repeatedly contradicted each other’s testimony on the witness stand. How can you convict someone based on that?

The prosecution offered Renzi a deal right before the trial where he would have only done 10 months in prison if he would just lie and plead guilty to a small public corruption charge of failure to properly disclose his financial interest. If Renzi didn’t accept it, he was looking at possibly more than 35 felony charges and over 150 years in prison. Renzi prayed and fasted for seven days, drinking only water and asking God for wisdom. At the end of the fast, his son had to help assist him so he could eat. After eating, decided he could not accept the deal.

His children recall him telling them he would rather die than get up in court and lie that he ever misused his public office. He could not in good conscience allow a despicable deal which would have covered up the truth – that the South African former president of a foreign-owned mining company, Resolution Copper Company, named Bruno Hagner, along with a corrupt FBI agent, took out an innocent U.S. Congressman. Renzi would rather let the world know the truth, even if it meant a life behind bars.

Ever since I started writing about the corruption in this case beginning in July, people all over the country are finally hearing what really happened and are emailing me information that even Renzi’s defense team was unaware of. Someone in Colorado told me a couple of weeks ago that Aries’ father Frank has a history of sleazy real estate deals – yet more evidence it was Aries who had proposed the land exchange, not Renzi.

The Phoenix New Times described[5] real estate developer Frank Aries in 1990, “Aries, who drove a Rolls-Royce, lived in a $1.6 million home in the ritzy Broadmoor district of Colorado Springs and liked to brag about the multimillion-dollar sailboat he had his eye on, was not a man who thought small.” The article explains how he connived $240 million from Western Savings & Loan to invest in a real estate project in Colorado Springs that had little chance of surviving,

Aries’ willingness to pay top dollar for raw land in a time of economic uncertainty and Western’s blind faith in the bet-it-all principles of Sun Belt real estate are straight out of a financial fairy tale…The remarkable loan agreement he worked out with Western saw to it that he wasn’t personally responsible for a dime of the money. At last word, the 56-year-old Aries was making plans to sail “probably all over the world…As Aries sails off into the sunset, Western Savings is now under the control of the government’s thrift bailout agency, the RTC. The taxpayers will pick up the tab.

Yet what may be the most alarming new piece of information is the role former U.S. Secretary of the Interior, powerful Democrat Bruce Babbitt from Arizona, played in the land exchange. Aries’ proposal to Renzi at their first – and only – meeting contained a document that contained a footer revealing it had been drafted from the computer of Babbitt’s current law firm. It included the “Sandlin property,” something the prosecutors had claimed was Renzi’s idea to include in the exchange all along to make it look like he was setting up the exchange to benefit himself. At that meeting, Aries even boasted to Renzi that the entire proposed land exchange – which included the Sandlin property – “met Babbitt’s gold standard.” Why would Renzi not feel comfortable at that point, with a former powerful Democratic Secretary of the Interior approving of the exchange? If including the Sandlin property was so wrongful, why did Babbitt give it his approval?

The problem is, what judge is going to risk taking on and implicating Babbitt in all this? The Babbitts are one of the most  powerful, longstanding families in Arizona, heavily tied into the Democrats who control much of the legal system.

This sordid prosecution also ties back to the powerful Keating Five – another powerhouse Renzi was facing. Ron Ober, campaign manager and chief of staff for former Arizona Democratic Senator Dennis DeConcini – who successfully escaped anything but a mere wrist-slap finding against him for his role in the scandal due to his immense power and influence – was hired as a lobbyist to represent the Resolution Copper Company to procure the land exchange through Renzi. Ober was also a friend of Charles Keating, Jr. Keating served four and a half years in prison, but Ober managed to distance himself and escape any tarnishing from that association.

Ober told Renzi that if he didn’t agree to push through the land exchange, RCC would go to Arizona Congressman Jim Kolbe instead, which would make Renzi look bad since the land exchange was located in Renzi’s district. Ober asked him if there were any other properties that should be included in the land exchange, and Renzi suggested he speak with The Nature Conservancy, the military officials at Fort Huachuca and Senator McCain’s office – all of who had told him that they wanted to see the Sandlin property included in the next land exchange in order to save the Fort and the San Pedro River. In fact, the court record shows that many supported including the Sandlin property in the exchange, including two mayors from Sierra Vista, the chair of the Cochise County Supervisors, the Fort Huachaca 50 business council and a host of other officials from around the state. The alfalfa farmer using the Sandlin property was draining massive water from the land. Renzi finally reluctantly agreed to the land exchange, but he still had concerns about allowing a foreign-owned company run by a South African to buy out a significant amount of Arizona’s resources. Renzi also revealed verbally to RCC and on his public financial disclosure statements that Sandlin was a former business associate and that Renzi would recuse himself if that was an issue.

Ober and the powerful, connected Democrats working with him representing RCC then started getting pushy, demanding that Renzi ram through the legislation on their timeline. They never liked Renzi from the start, not wanting a Republican to get the credit for a land exchange that would benefit so many parties – including Native Americans, the Fort Huachuca military base, and the Nature Conservancy – and finally turned against him. They secretly decided to scrap the deal and just went through the motions, setting Renzi up for a fall by pretending that he had proposed the land exchange – namely the Sandlin property inclusion – since they had figured out Sandlin loosely owed Renzi money and they could say that Renzi had set it up to benefit him so Sandlin could pay him back. Eventually Renzi discovered they even had a name for the plot to take him down, “Operation Eagle.”

The reality is[6], Sandlin easily could have paid Renzi back the money at any time from all of his real estate holdings. He owned free and clear a property that was worth in excess of $5 million which would have been simply to obtain a 20 percent loan from.

But the powerful Democrats who controlled the governorship and much of the legal system weren’t going to risk a chance that Renzi might eventually run against Janet Napolitano for governor or continue on his successful path as a Republican who even Democrats liked. Evidence came in discovery during the trial that RCC had gone to Janet Napolitano and told her that the deal must be killed or it would help Renzi, who had become a #1 target of Democrats. No one doubts at this point that Napolitano was calling the shots, telling Restaino through his wife to continue the prosecution against Renzi no matter how trumped up.

I’ve still never met Rick Renzi. But the more I investigate this case, the sicker I get to my stomach.

What is now beyond doubt in the Renzi case is that a foreigner from South Africa named Bruno Hagner, who lived in Arizona, developed and executed a plan called Operation Eagle to take out an innocent U.S. Congressman. This former executive of RCC and his conspirators should be investigated by an independent counsel. All electronic records where Hagner discusses Operation Eagle should be investigated and turned over to Renzi’s attorneys. There also needs to be an electioneering investigation into Hagner and the the DOJ employees named in a memo from the Justice Department who were targeting Renzi and leaking information deliberately about the FBI investigation to hurt Renzi’s reelection chances.

Just like Fast and Furious, now that the criminal activity continues to leak out, it is time for a reexamination of the entire land exchange and prosecution – maybe it’s time for a congressional investigation. Otherwise the process of how we elect our representatives will never be safe from foreign predators.

It has now been since July that Judge Bury was made aware of this new information. Will he stand up to the powerful corrupt interests, or will he let an innocent man sit in prison?