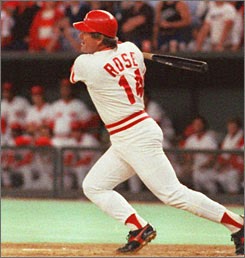 It’s been 26 years since Pete Rose has been banned from Baseball for a crime that’s culturally lees relevant today than it was in 1989. And given the fact that states around the country are looking to legalize gambling to fill their coffers with tax revenue, why should Rose continue to suffer?

Yes, Pete Rose bet on baseball games. For a time he lied about doing it. But, 26 years seems like quite enough punishment for a 73 year old man to pay. I can think of 4,256 reasons[2] why Pete Rose deserves to be in the Hall of Fame.

No other player in baseball history has more hits than Rose. Perhaps no other man played the game harder than he did? He wasn’t the fastest, or the best skilled player in the game. He never had the power of Babe Ruth, or the swiftness of Lou Brock. But, nobody that ever played the game was as hungry for base hits as he. If he had 2 hits in a game, he wanted the third. If he’d gone 4 for 4 with another at bat and made an out, he would be disappointed with his performance.

That was Pete Rose!

He belongs with the All-Time greats and it should happen while he’s still alive because enough is enough!