Toby Keith: If Someone At Charleston Church Was Armed Maybe Some Of Those People Would Still Be Alive

Whenever there is a mass shooting in the country, expect there to be the usual calls for new gun control laws from the Left and their counterparts in Hollywood.

However, country singer Toby Keith is not one of those Hollywood gun control fanatics.[1]

In fact, Keith is taking quite the opposite approach, making a logical point that the media and Hollywood have yet to mention in regards to the Charleston, South Carolina shooting. 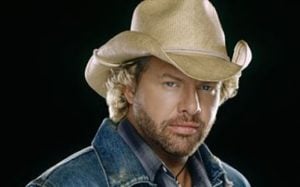 It was 24 hours after a lone white gunman shot up a Bible-study meeting at an historic African-American church Charleston, S.C., killing nine people and sending Americans into another national paroxysm of despair over violence, guns and racism.

Appearing on the red carpet at the Songwriters Hall of Fame gala in New York where he was being inducted, Keith said stricter gun laws would not have made a difference in Charleston.

Countries with tough gun policies and very few guns in private hands, such as Norway, still have gun massacres, Keith said, apparently referring to the 2011 shootings and bombings of 77 people, many of them children, by a far-right and racist terrorist in and near Oslo.

Keith said it’s hard to predict when violence will happen. But if an armed police officer had been at the prayer meeting at the Emanuel African Methodist Episcopal Church, “maybe seven or eight of those nine people would still be alive.”

This is the logical standpoint from conservatives and libertarians. The idea that making guns harder to obtain would have prevented the Charleston church shooting is not only stupid, its illogical.

As you can imagine though, Hollywood and the media are about to come after Keith, so he better get ready for the onslaught of hate from the gun control fanatics.