The left has been pushing hard for minimum wage to raise for low-skilled workers…and despite all the folks with common sense telling them that it’s not going to work out the way they think it will – they continue to push. Now, McDonald’s has something to say about it…that sounds a little like… “WE TOLD YOU SO!”[1] 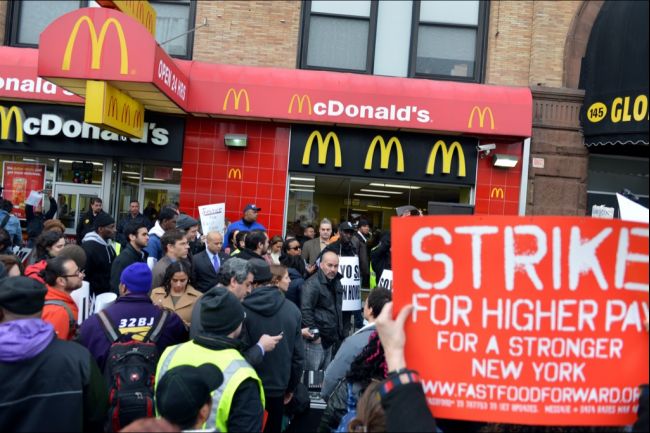 Business Insider reporter Hollis Johnson says that “The age of the restaurant self-service kiosks has dawned, and it’s the end of fast food as we know it.”

Indeed, last week, Wendy’s fast food restaurant chain announced plans to offer self-serving kiosks at its 6,000-plus locations across America, making them available to costumers by the end of 2016.

Last February, McDonald’s rolled out its “Create Your Taste” touchscreen kiosks, which allow customers to customize their own meals and burgers.

Panera Bread was among America’s first food service outlets to head down the path of lower labor costs and service efficiency that self-serving kiosks provide. Panera unveiled its “Panera 2.0” initiative in April 2014. At the time, roughly half of the company-owned stores were equipped with the new self-serve technology. The company, like its competitors, planned to expand the devices to its remaining locations by the end of 2014.

Before Panera Bread, Chili’s Grill & Bar began testing tablets that allow diners to order beverages and desserts and pay their entire bill, free from the struggle of having to flag down a server. An initial 180 tablets in a handful of Chili’s restaurants, soon ballooned into 45,000 tablets across 823 Chili’s restaurants. The restaurant’s executives called it “the largest rollout of tabletop tablets in the U.S.”

As expected, the people that were rejoicing over getting a raise to $15 will now be sulking in the unemployment line because robots can do what they do for less. Or worse…they will not be sulking at all, as they walk to their mailbox to pick up their unemployment check every month.