TOLD YOU! Transgender Caught Doing This To 13 Yr-Old Girl In TARGET…

It was a fear and a prediction, and now it’s already happening. A little girl was using the restroom in Target when she heard a familiar sound. The sound of a phone taking pictures. She was curious enough to bend down and look under her stall, and what she discovered was horrifying…[1] 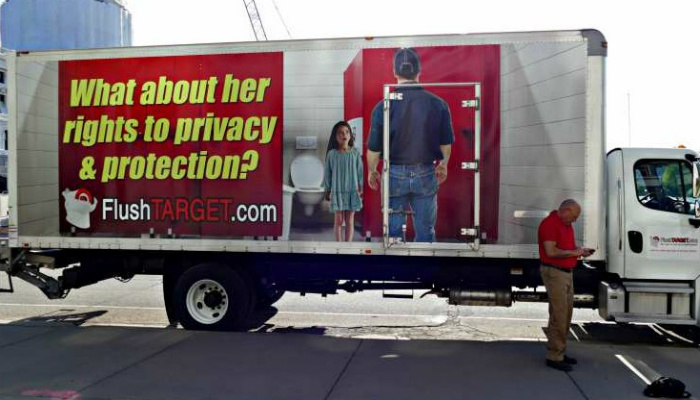 One of the victims, a 13 year old girl, said she could hear someone’s iphone camera snapping and was curious, so she looked under the stall only to see the camera phone in her face. She ran out and told her father, who held the door shut until police arrived.

When authorities arrived, they arrested 28 year old James Goebel and searched her phone for evidence. They found over 700 photos of young girls using the restroom, from dates ranging in the past 5 months.

Dallas’s local LGBT community has come together to stand in defence with Goebel, claiming she should not be persecuted because she was “born a pedophile and therefore can not change her sexual orientation”. This comment comes from the leader of Dallas’s LGBT Aqua Squad, Dorothy Wright.

The United States does not currently view pedophilia as a sexual orientation, but this is something that Dallas LGBT Aqua Squad is hoping to change.

Really? Is that what’s next on the agenda of Obama’s America? Making pedophiles an acceptable sexual orientation? Sounds crazy and impossible…but so was allowing men to share a bathroom with little girls once upon a time.