James O’Keefe is well known for his gotcha-journalism, catching officials approving prostitution, violence, and most recently, the Islamic State. A student at at Private university in Florida is facing suspension[1] after she participated in an O’Keefe style, Project Veritas approved recording of Barry University school officials approving an ISIS support group on campus. 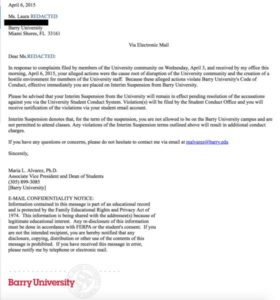 “The student journalist, identified only as Laura, recorded her efforts trying to launch a “Sympathetic Students in Support of the Islamic State of Iraq and Syria,” student group last week.

“This is a personal attack on an honor student because they couldn’t defend the egregious actions of their staff members.” Tweet This

This morning, she received an emailed notice from Maria Alvarez, the university’s associate vice president and dean of students, stating she had been suspended over allegations that her reporting violated the university’s Code of Conduct.

The university’s Code of Conduct demands that “[m]embers of the campus community must act out of mutual respect to establish an atmosphere of trust,” and that enrollment at the school “presumes an obligation on the part of the student to act at all times in a manner compatible with the university’s purpose, processes and functions.”

Laura, a senior majoring in communications, was recently recognized as a Senior of Distinction by the Barry University Communications Department.”

If one were to follow the logic contained in the letter, it would be safe to assume that Laura was suspended because she was pointed out that the school’s purpose included the establishment of extremist groups for students.  O’Keefe recently released a similar video [3]in which a Cornell Dean authorizes the establishment of a Pro-ISIS group on that campus.  How far out is a Rolling Stone expose?