After having been kidnapped shortly after his birth, a man has tracked-down his birthmother 41 years after the hospital told her he was dead. The Daily Mail[1] reports: 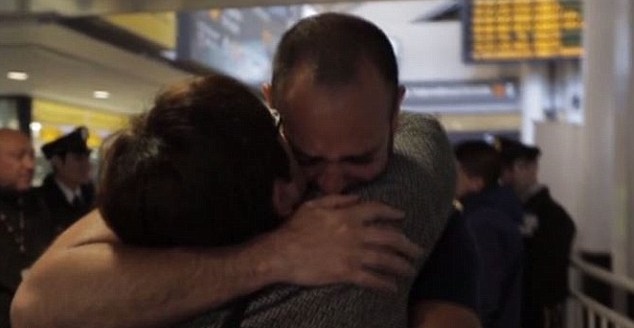 They couldn’t have talked even if they want to because they speak two different languages.

However, the language barrier didn’t stop English-speaking Travis Tolliver from communicating with the mother he was stolen from, Nelly Reyes, hours after his birth in Chile more than 41 years ago.

When the pair met for the first time at Arturo Merino Benitez International Airport in Santiago, they wordlessly embraced without a second thought and held each other for a long time.

Prior to the emotional reunion, Reyes, 61, had been waiting for Tolliver arrive with her granddaughter and ten-year-old grandson in tow, according to CNN[3].

They had a sign reading: ‘Lovingly waiting for Travis, your mother Nelly and family.’

After they met, Tolliver, who has two children of his own, cried tears of joy while Reyes said in Spanish: ‘I’m going to hug him every day.

The mother of six children was told by hospital employees that her son had been born with a heart condition hours after she gave birth to Tolliver on November 15, 1973, at the age of 19.

Nurses informed her the baby was unlikely to survive and then told Reyes he had died a few hours later.

No one knows who took Tolliver, but he ended up being raised by a family in Tacoma, Washington.

Neither Tolliver nor his adoptive parents knew what had happened to him and thought his biological mother had simply abandoned him.

Tolliver decided to try and seek out his mother when he turned 40 and he used the web to do it.

He said: ‘I started by joining a pen pal web site and talking with people from Chile.

‘This really kickstarted my need to find my biological mother. I found a FB site Chile Adoption Birth Family Search.

‘I gave them all the information I could find on my adoption.

I want to say within 3 to 4 weeks they had found my mother.’

41 years is a long time and much has been wasted. Hopefully, mother and son have many more years to get to know each other.