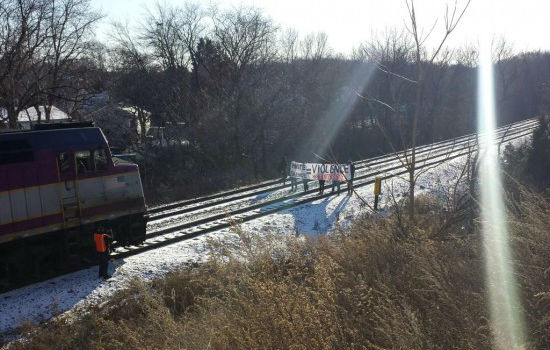 [1]Remind me, what do police officer shootings have to do with football playoffs? Oh yeah, that’s right, as much as fish have in common with bicycles. Bizarrely, radical left-wing activists claiming to be from #BlackLivesMatter held up a sign on the train tracks in front of a train full of fans on their way to the Patriots playoff game, forcing it to a halt.[2]

According to the Tea Party News Network,

The protesters stopped the MBTA commuter train that was en route to Gillette Stadium for the playoff game for a total of four and a half minutes in honor of the four and a half hours Michael Brown’s body was left on the street after being shot during a physical altercation with a police officer.

If their goal is to be as obnoxious as possible and accomplish nothing, they sure achieved it. Stoking the flames of racism where no racism occurred does nothing to help race relations, but instead worsens them. The Michael Brown shooting incident has been thoroughly investigated by a grand jury and the cries of racism turned out to be false[3]. To continue to bring the incident up again and again now that all this has come out – while breaking the law no less – is making them look incredibly foolish as well as rude.