The wussification of Washington DC is not complete… there are still some stragglers who show they’ve got some balls on the Hill. Republican Rep. Trey Gowdy introduced an immigration bill to dismantle President Obama’s executive amnesty [1]and expedite the removal of criminal aliens from U.S. soil. 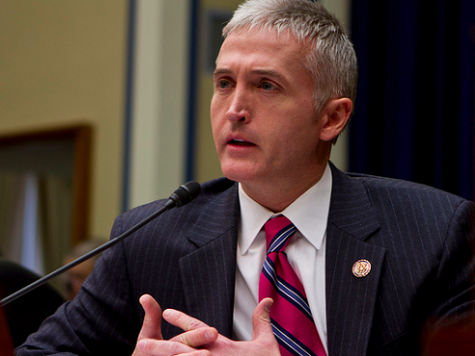 Named after Michael Davis, Jr., a sheriff’s deputy in California who was killed in the line of duty last year by an illegal immigrant, Gowdy’s bill would also provide a work-around for state and local governments to reinforce federal immigration laws while also implementing an annual review of the executive branch’s use of prosecutorial discretion in immigration cases.

“If we are serious about finding a long term solution to our immigration system, we must address interior enforcement,” Gowdy, the Republican chairman of the Immigration and Border Security Subcommittee, said in a statement announcing the measure.

“This bill, which is one part of the Committee’s step-by-step process to address our broken immigration system, will ensure we do not repeat the mistakes of the past and help us earn back the trust of the American public,” he added.
If enacted, the bill would completely dismantle what Gowdy describes as Obama’s “unilateral, constitutional actions on immigration” by cutting off any and all funds to the initiative. It would also strip Obama and all future presidents of any power to unilaterally shut down immigration enforcement by allowing state and local governments the authorization to enforce federal immigration laws.

I hope the few conservatives left in DC can convince enough Reps to defund all-things-Obama… course starting with this would be a real win for America.