Trey Gowdy Opens A Can Of WHOOP On Harry Reid – And It’s Glorious! VIDEO

Harry Reid is being a total asshat over this whole FBI re-opening Hillary Clinton’s email case again. As in the fashion that only Trey Gowdy can pull off, Reid is getting back what he’s dishing out TEN FOLD![1] 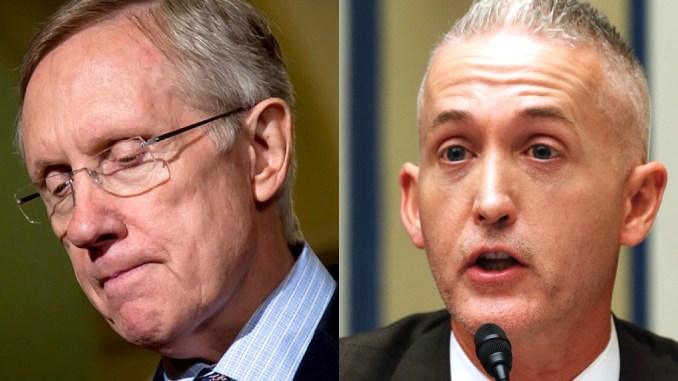 Gowdy is calling him out and his words are catching fire.

On Sunday, Gowdy took a spot on Fox New’s Special Report with Bret Baier, specifically to respond to the stupidity of Democrat Sen. Harry Reid’s claim about the FBI when he stated that Director Comey’s decision to re-open the email scandal case of Hillary Clinton was strictly “politically motivated.”

“Your actions have demonstrated a disturbing double standard for the treatment of sensitive investigation and what appears to be a clear intent to aid one political party ore another,” read Reid’s letter.

“I’m writing to inform you that my office has determined these actions may violate the Hatch Act, which bars FBI officials from using their official authority to influence an election. Through your partisan actions,’ this is Harry Reid, ‘you may have broken the law. The double standard established by your actions is clear.”

There is only one response that needs to be said to this…any other would not do it as much justice. That is the response of Trey Gowdy…who held NOTHING back.

“My second reaction is: I did not know Mormons used drugs. And anyone who is capable of sending out that press release has to be under the influence of something.”

“Jim Comey did not tell her to use her private server. He did not say to mislead the public about whether or not you turned over all of your work emails. And he certainly didn’t say, Secretary Clinton, why don’t you say you neither sent nor received classified information.”

“So, look, Senator Reid is a political hack and Jim Comey is a law enforcement office,” he said.

“He’s not a Republican or a Democrat. I’ve had my differences with him in the past, but he’s not a political hack like Senator Reid is.”

I believe Trey is right. Mr. Harry Reid has been a political hack from the very beginning and nothing he says has ever made any sense. I think we could agree that there are many of us who are glad he’s leaving.