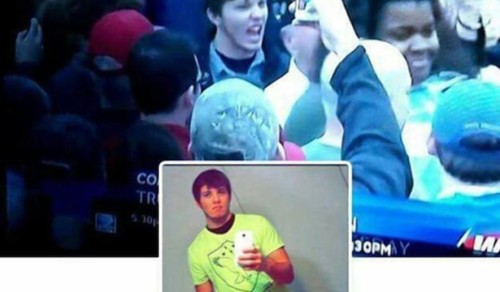 Donald Trump is apparently tired of protesters [2]being obnoxious at his rallies. So he’s taking matters into his own hands and offering to defend any of his people that take steps to oust those protesters. One of his people, pictured above, was kicked out of the Marine Corps Delayed Entry Program for his participation. Do you agree with these tactics?

He then asked the crowd, “Are Trump rallies the most fun? We’re having a good time.”

The billionaire real estate mogul said he was tired of the “political correctness,” when it came to handling protests at his campaign events.

Mr. Trump recalled another incident at a New Hampshire valley where a protester started “swinging and punching,” and he said some people in the audience “took him out.”

At least one of Mr. Trump’s supporters who assaulted the woman, Joseph Pryor, was punished for the incident when he was discharged from the Marine Corps Delayed Entry Program after bragging about his involvement in the assault online.

There’s no defense of senseless violence. Reasonable steps to remove those who interrupt rallies are fine, of course. We can only hope reasonable is what Trump meant by his encouragement to “assist” protesters in leaving. Time will tell. Do you support Trump’s statements?