When Donald Trump spoke about his followers loyalty and crafted a snarky 5th ave joke[1] that involved shooting someone and not losing any voters, his haters raced to Twitter to turn his words around. 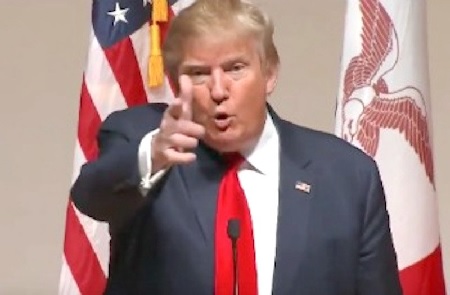 “They say I have the most loyal people. Did you ever see that?” Trump said at a campaign stop in Sioux Center, Iowa Saturday.

“Where I could stand in the middle of Fifth Avenue and shoot somebody. And I wouldn’t lose any voters, OK? It’s like incredible.”

One guy accused Trump as calling his followers “mindless lemmings” but the Don didn’t utter such words, he just said he has a loyal fanbase who knows that Trump wouldn’t shoot someone. Hypothetically, if they jumped over the Trump wall, then maybe. Just sayin…