Two Gunman Try To Storm An Anti-Muhammad Art Exhibit in TEXAS. It Doesn’t End Well For Them.

Pamela Geller and I don’t get along anymore (You can read through the many links about it starting about halfway down here[1] if you’re interested in the gory details); so I generally don’t go out of my way to cover anything she’s doing. 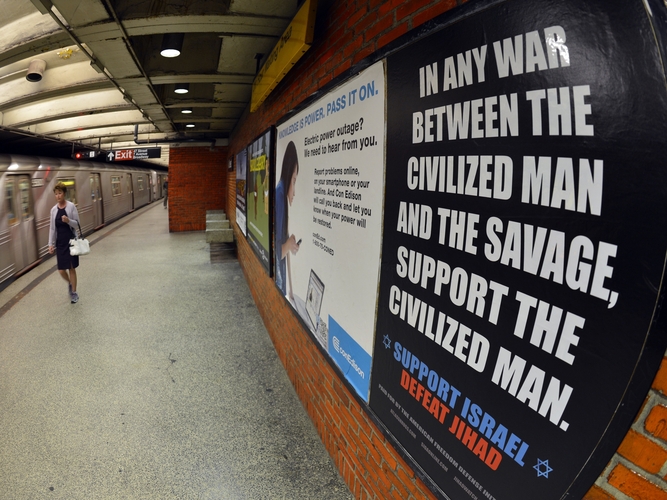 Ads condemning radical Islam went up in the New York City subway system today. The transit authority posted them after losing a legal battle with the ads’ sponsor.

However, even if I’m not friendly with Pamela, I’ll certainly side with her over murderous Islamic fanatics[3].

GARLAND, Texas — Shots rang out this evening at the Curtis Culwell Center in Garland, Texas during the Mohammed Art Exhibit and Contest. A law enforcement officer was shot and both suspects have been killed. Officers on the scene said that it is possible that explosives are in the area.

Attendees were immediately forced into lockdown by police, including three Breitbart News reporters. Sources say event organizer Pamela Geller and keynote speaker Geert Wilders, a Dutch politician, are safe. Breitbart Texas was conducting a live video interview with Geller at the moment of the attack.

….Officers are advising the scene is NOT safe. It is believed that explosive(s) have been placed near the Curtis Culwell Center. FBI Bomb Squad, Garland Police, Garland SWAT, Rowlett Police, Rowlett SWAT, and Texas State Troopers are on scene.

There is a huge perimeter set. No one gets in and no one gets out.

ISIS is taking responsibility for this attack.

Welcome to Texas, Team Jihad! Now you’re good radical Muslims — and if some liberal turns all this around and tries to make Muslims the victims here somehow, let me go ahead and say you can shove it where the sun doesn’t shine beforehand!