“We don’t serve police officers”[1] said one Whataburger manager who refused to serve 2 Police Officers visiting the food establishment for a meal. The incident has brought Whataburger into speculation, and they want to make things right! THIS is what they have to say in response. 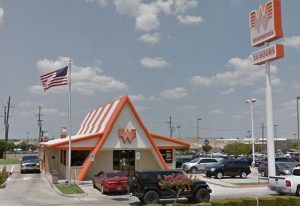 Two police officers from Lewisville, Texas say they were denied service at a Whataburger because they were cops.

Officer Cameron Beckham and reserve deputy Michael Magovern were on duty to work overnight traffic security at a construction area on Tuesday night but they decided to stop into their local fast food joint for some food before the start of their shift.

Magovern told Fox that a man behind the counter, who identified himself as the manager, looked at him and said, ‘We don’t serve police officers.’

The officers thought he was joking at first but the employee remained silent and did not smile.

‘He said it with a straight face, no smile and just stared at us,’ said Magovern to CBS.

‘Even if he was joking, I’m not going to eat here because I don’t trust that.’

Whataburger said on Wednesday that they fired the employee who has not been named. They also released a public apology.

‘We were appalled to hear of an employee refusing service to two officers, as we have proudly served first responders across our system for decades.

‘As soon as we heard of this isolated incident, we began our own internal investigation overnight. The employee that refused service is no longer employed with Whataburger. We’ve also invited the officers back today so we can apologize in person and make this right,’ said the statement.

Magovern said that he still endorses Whataburger as a company and believes this to be an issue with just one employee at the establishment.

‘I knew right off the top this was not a Whataburger corporate issue,’ said Magovern.

‘This was a single location, employee with a problem issue.’
Officer Becham said that even` if the incident involved just one employee, it is troubling nonetheless.

“It really strikes a nerve personally and professionally because maybe he’s joking or maybe he’s not, but how do we trust that individual or that company to cook anyone’s food now,’ Officer Beckham added.

Magovern suggested the fired employee brush up on his ‘people skills.’

The way I see it…if that manager wants to play foolish games. Fine! He does not have to serve fries and burgers to Police Officers, and Police Officers no longer have to put their life on the line for him either. Seems fair, right?